I have been thinking some more about Eastern Promises

which we watched last night and was one of my Christmas presents from Beth. It stars Viggo Mortensen1 and is directed by David Cronenberg and without both of them I think it would just be a rather bloody little thriller of no great consequence. 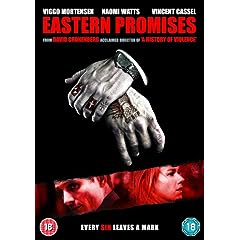 It certainly is bloody. The BBFC 18 rating notes "contains strong bloody violence". They're not joking: it includes two throat cutting scenes each vividly shown on screen and a brutal fight in a bath house involving a naked Mortensen which I'm not even going to start to describe.

It is a strong cast but what makes the movie is Mortensen. Watching the way he stands, the way he looks at things, and the way he moves is a real pleasure. He is a truly superb actor completely inhabiting the character he's creating.

So I strongly recommend it, although for the squeamish (like Beth and me) you may need to look away on a couple of occasions.

Oh, and yes, you do get to see all of Mortensen in that bath house ...