I do like my pork, but as Beth can't eat it these days I don't eat a lot of it either, but if I do I like to but outdoor reared, as I figure at least that way they've had a good life outside until they're slaughtered. Indeed we used to buy our pork from an organic farmer up at Waterbeach who took us around his field to introduce us to his pigs, including one we later ended up eating quite a lot of.

But it turns out that in general the term "outdoor reared" means rather less than that. What got me suspicious was this ham from Morrisons: 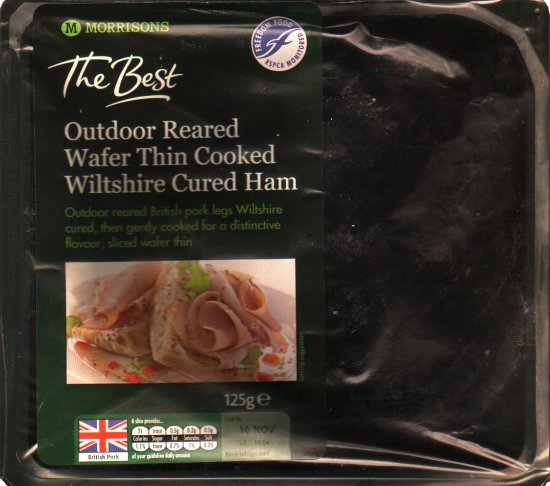 There it is on the packet, clear as day, "Outdoor Reared", and for extra assurance it's "Freedom Food RSCPA Monitored". Except just before I put the empty packet in the bin I turned it over and read the label on the back:

So I did a little research and came up with this page. It's an article about "outdoor reared" pigs and it says:

Only around 25 - 30 per cent of piglets are born in this kind of outdoor system - consumers may not realise, however, that the piglets only stay outside for less than four weeks before they are weaned and transported to a 'nursery' unit and/or 'finishing' unit. Safeway specification ensure the piglets, now termed 'growers', are housed in semi-intensive conditions in large covered yards or pens with straw bedding. According to Geoff Barker, Technical Adviser at Grampian, however, approximately 50% of 'outdoor bred' piglets are transferred to intensive units. Piglets are finished (slaughtered) at about 22 weeks, when they weigh in at around 95 kilos - and it is the meat from these now hefty pigs that carry the 'outdoor bred' label.

So there you have it, although the sows are kept outdoors (they're the big pigs you see in fields all over the countryside now) and give birth in what is an essentially outdoor environment the piglets are separated once weaned at about four weeks and spend the rest of their short life, about another 18 weeks, indoors and 50% of those are in intensive units.

And as for "Freedom Food" that really is a con. All it means is that the animals will be well looked after, it doesn't mean they'll have any real freedom at all. So I'm not impressed with the RSPCA either.