We made our first sausages today. For a long time now I've been looking for sausages like McCarthy's butcher used to make in Reading Road South, Fleet when I was a kid. Never found anything quite like them: they were made with coarsely ground pork and lots of herbs and were delicious.

We've tried lots of local butchers and although some, like Philip Bull (is that a great name for a butcher or what?) of Waterbeach, do decent tasting pork and sage, they all grind the pork too finely.

So Beth bought a grinder and some pork "casings" (sausage skins to you and me, they come in a tub, heavily salted, and the minimum quantity is about 100m!) and today we gave it a go. We went to the butcher on the Over road at Willingham and bought a big bit of pork, essentially a hand with a bit of hock and belly still attached. About 5.5kg and he charged us £17 for it so it was a bargain (£3/kg, bone in).

Out of that we got a bowl of pork crackling, a belly joint (which we're going to have tomorrow for supper), a small shoulder joint for later, 38 sausages and and two bags of diced pork (left over when we had finished making sausages).

Here's a picture of the first batch of sausages. These were pork and sage. 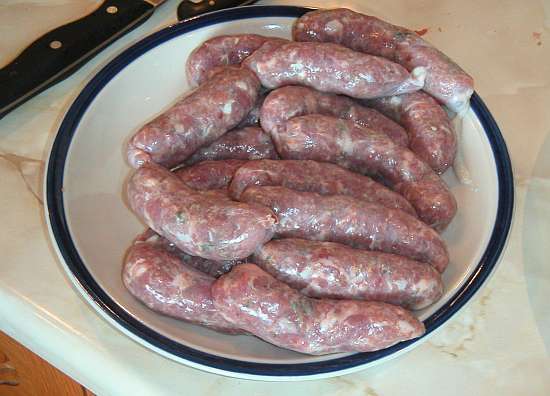 They were made with 1kg of coarsely ground pork, 100g of fine bread crumbs (from some organic white I made yesterday, put through the food processor), chopped sage from out of the garden, a teaspoon of salt and about the same of ground black pepper, plus a little chilli powder.

We then went on to make some pork and bacon sausages, using 25% bacon (which Beth had made earlier in the week - yup, we make our own bacon too, well Beth does) and 75% pork and with a lot less sage but a little dried mixed herb. We finely ground the bacon and coarsely ground the pork.

So the freezer is now full of sausages.