Only two and a half years late I finally got around to watching Scott Pilgrim Vs. The World on DVD today. Mark Kermode sang its praises again recently on the show he does with Simon Mayo on Five Live. I was a bit dubious as I remember that at the time the movie came out I bought the first of the comic books on which it's based and being disappointed with it. 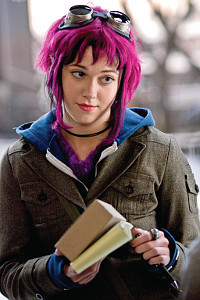 But then I saw a copy come up on Lastminute Auction1 for 99p plus £2 carriage and I thought I'd give it a punt.

I wasn't disappointed. It's a very clever adaptation demonstrating yet again how CGI lets directors do all sorts of stuff they could only dream of a few years ago. It's funny and it's also rather sweet.

Michael Cera, who plays the eponymous hero, is to my mind the weakest element but there's an excellent supporting cast especially the gorgeous Mary-Elizabeth Winstead as Ramona Flowers, a mysterious American delivery girl with a dating history that drives the plot of the film. She has a way of looking at Scott with her head to one side which is both cute and quizzically sarcastic at the same time and makes me weak at the knees.

The other stand out performance for me was Kieran Culkin2, Scott's gay roommate and close friend who has some of the best lines in the movie.