This is not the article I originally wrote so if you've read it already my apologies but I think you'll understand when you get to the end of it.

You'll have to excuse me if I've been a bit distracted this week but Jack was diagnosed on Monday with a squamous cell carcinoma on his nose.

We've been warned by our vets ever since we got him and Jessie that we might have problems with Jack as he is, in human terms, ginger so he's got a lovely pink nose which can burn very easily. Luckily he's not a great dog for being outside, unlike Jessie who will happily sit on the patio for hours in the summer, but Jessie's got proper pigment in her nose so is at much lower risk. Of course what we don't know is what happened to Jack in the years before we got him. All I know is that he does burn very easily. Last summer I spent an afternoon in the sun with him and a friend watching the bumps on the Cam and forgot the danger and the following day his nose was badly burned.

When he had his annual "MoT" last November the vet who did it was a bit suspicious of a sore patch on his nose, but he often scratches his nose as he has a habit of dividing into the bushes for a sniff, especially when off the lead, but she wasn't that concerned so I've just been keeping an eye on it. 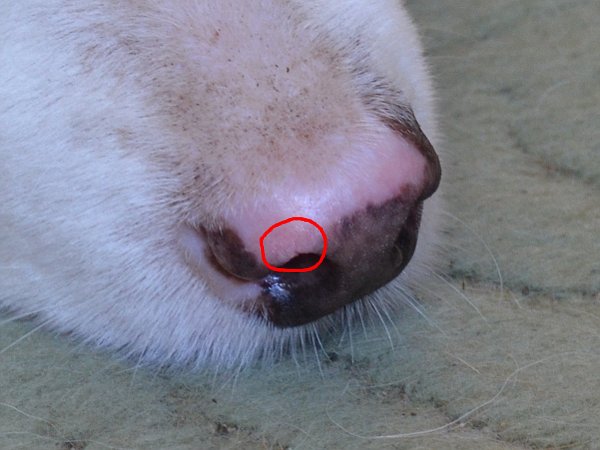 And a couple of weeks ago I finally started to see signs of a distinct area which was a very subtly different texture to the rest of his nose pad. I stalled on going but finally booked him in on Monday and the vet took one look at it and said it looked like a squamous cell carcinoma.

This was not particularly good news as they are malignant but apparently the risk of malignant metastasis is relatively low and the web site I linked to above claims that "Overall prognosis is good if the tumor is small and superficial" but it does depend on the type.

So on Tuesday he had a biopsy under a general anaesthetic and came home with two stitches in his nose. 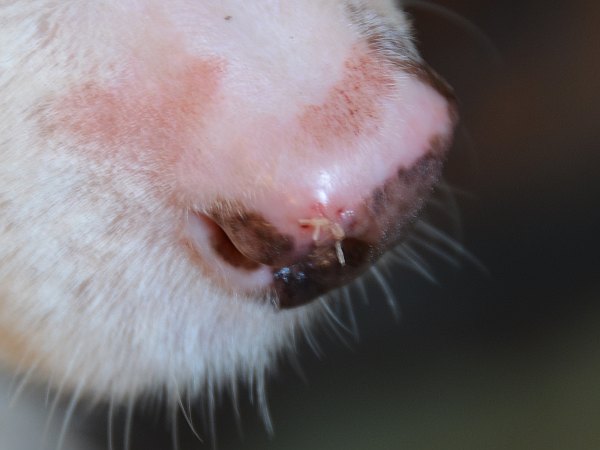 I was expecting to have to wait a week before we got the results of the biopsy but the histology report was waiting for us this morning when we went back for a check up on his stitches. You can read it in full here but in essence it says (highlighting as per our vet's underlining):

The is a mild to moderate mixed mainly mononuclear superficial perivascular dermatitis. [...] There is no evidence of neoplasia in the sections examined. The changes are of a 'stereotypic' perivascular dermatitis reaction pattern which is shared by many common skin diseases. [...] There is no evidence of idiopathic vitiligo or any other autoimmune skin disease.

Neoplasia is what we lay people would call a tumour, of whatever sort. And Jack's not got it! I'm very happy, even if I'm about £220 poorer, but at least I know we're safe ... for now.

So that's a rather different ending to the original ending to this post. As I said in a tweet I sent my sister this morning "Result!!!".