As it's an unseasonably nice day I've been out taking photos around the village for the Milton village photo archive and when I got back I slurped them off the camera to take a look at them.

I use XFCE as my desktop manager on my Linux desktop PC and the default image viewer is ristretto which the original author described thus:

How right he was. For a start I've always been depressed by how long it takes to spin up when you first ask it to open an image, but I've lived with that up until now. But today I was looking at my photos and thinking "these images really aren't very sharp". Take this one:

I clicked on the "show full size option" on ristretto and looked at the peak of the roof in the middle of the shot. It looked like this: 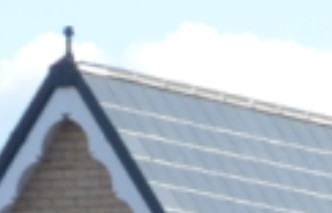 You can see why I was disappointed. I was bemoaning the state of the focus on my images to Beth and she asked what software I was using to view the photos. I said I was using the default one that XFCE came with i.e. ristretto. She wandered off but it gave me pause for thought so I opened the same photo in GNU Image Viewer and saw this: 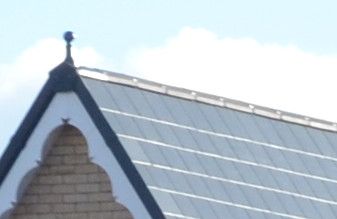 Much more what I was expecting. Opening it with gimp confirmed it: the photo looked identical in there.

So ristretto is blurring images. Looking on the Web I soon found that I wasn't the first person to see this behaviour, several reviews here mention this issue.