I've been worrying about this advert from Shell which has been doing the rounds in one form or another recently (I've also seem a version where the ball is set against Nelson's Column). This is the version that was in the latest Private Eye: 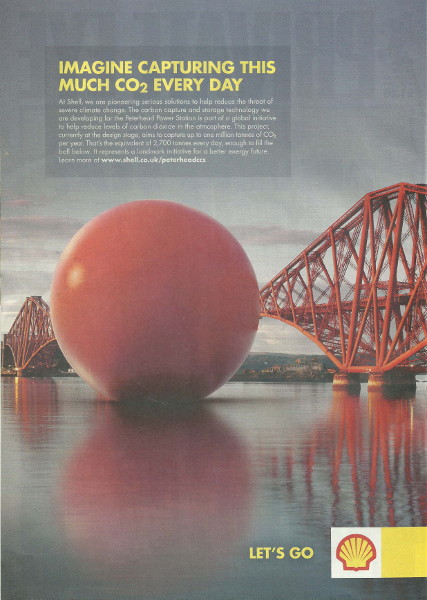 As you can see it shows a big red sphere about as high as the Forth Rail Bridge (which is 361ft apparently so that's 110m) and, according to the text below, it's full of CO² with a mass of 2,700 tonnes. 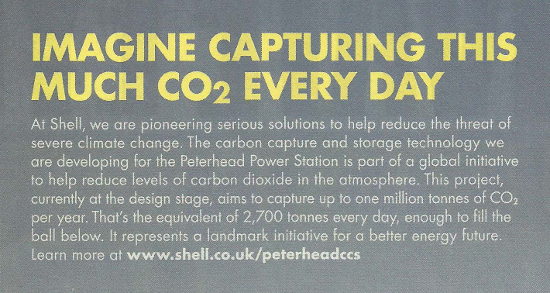 Which seemed odd to me, I really wasn't convinced it would be that much mass, certainly if it was gaseous. That it's a sphere implies that the CO² is under pressure. So let's do the maths. 110m means that the sphere has a volume of about 697,000m³

Curious, but we're in the same order of magnitude so I was worrying unnecessarily. OK, well the ball is turgid so presumably it's under pressure. Suppose it's at 2 bar1 then I think (he said naively, think I need to say "Boyle's Law" here as if I remember what I'm talking about) that means double the density so we will be pretty exactly at 2,700 tonnes.

All of which is fine, better than I expected. So Shell aren't lying. But in fact they're missing a trick: they could have made the sphere have a diameter about 25% larger (cube root of 2) so twice the volume and then claimed, not unreasonably, that the sphere was only just inflated so at STP.