I was reading this story in The Guardian in bed today about how four British Tornados hit seven targets in eastern Syrian oilfields within hours of the Commons decision to attempt to degrade and destroy ISIS forces in the country. 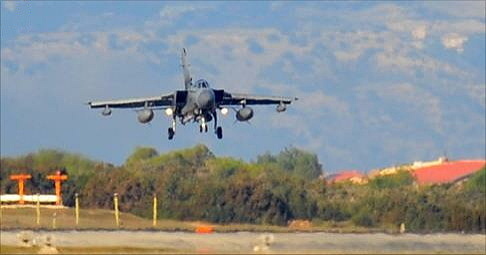 They used Paveway bombs to hit "Isis-controlled oilfields" and I was struck by the fourth paragraph from the bottom. It says:

As the first British aircraft were sent within hours of MPs voting to back the strikes, Capt Richard Davies, of RAF Marham, told the BBC: "In over 400 airstrikes that the RAF has carried out in Iraq, we have had absolutely no civilian casualties reported.

Now the key wording is at the top where it refers to the oil fields as "Isis-controlled". Any money you like that's straight out of an MoD press release. But the question I'm left asking myself is who is operating that oilfield? Are they people who you and I would regard as civilians caught up in the situation just because that was their job when ISIS rolled in or are they ISIS fighters? I'd suggest they're the former. And oil fields operate 24x7. So unless these strikes managed to avoid any casualties I'd think Capt Davies' "absolutely no civilian casualties reported" may be true ... but only because of the way they've define "civilian"1.

Either way we've just probably just made someone a widow and some children fatherless who wanted no part in this. Well done us.

Unsurprisingly yesterday's post had sensitized me to this issue so I was paying attention this morning when this topic came up on Saturday Breakfast on Radio Five Live.

Here's what was said, starting at 07:18:54. The first voice you hear is the presenter Chris Warburton, the second is a BBC correspondent in the Middle East.

So there you have it: the Americans have redefined tanker drivers as combatants, previously civilians, and that then allows them to blow up "hundreds" of tankers and kill their drivers while still "minimizing civilian causalities".

And any money you like we'll be using the same definition.