For a while now I've been wondering if I could set up an auto-responder for Facebook Messenger because although I use Facebook I don't, despite Facebook's determined attempts to make me, use Messenger. So when people do message me then, if I'm at home using my browser I do see their message. Eventually.

On my phone it tells me there is a message for me, but I need to install Messenger to read it which I'm not going to do when I'm paying for the data and I don't want it on my phone anyway.

So it takes a while for me to respond, if at all. Which is not what people are expecting.

What I want is a simple auto-responder to say "please use something else". If you Google for this you will find many discussions where people talk about how it used to be possible but how it is no longer. There's a web site that even claims to do it, until you try to link your Facebook account and they admit that actually they can't any more.

Anyway today I have found a solution. It's the universal instant message client Pidgin which is available for Linux (and Windows too I think but that's not my interest). That used to work with Facebook out of the box when Zuckerberg's people used XMPP but when Facebook went proprietary to freeze out third party messenger clients they were stuffed. 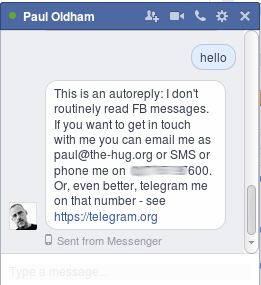 And this is where jgeboski's purple-facebook plugin comes in. Install that (easy with Debian or Ubuntu as there's a repo) and you can then add your Facebook account to Pidgin.

If you've got two factor authentication on Facebook then you have to do an odd little dance where you go back a second time and enter the six digit code in the password field(!) but it all works.

Then you need the "Autoreply" plugin (which in Ubuntu was in the pidgin-plugin-package) and you're away. There's a bit of tuning to do to get it right: turning off all notifications for example (disabling the "Libnotify Popups" plugin being a major step in that) and stopping it opening a popup when a new chat begins but once it's all done then you just leave it running in background and what you see on the right is what now happens if you message me.