So yesterday I was having a less than good day so come supper time I went for the easy option and grabbed a Ginsters Pasty out of the freezer and stuck it in the oven. While it was cooking I noticed that the packet had a promotion on it. And that's where my troubles began ...

They were running two competitions. One need not concern us but the other was: enter the batch number off the packet and your email address1 and you might win a 55" TV, sofa and fridge in their weekly draw plus there are 30,000 Ginsters large sausage rolls to be won.

OK, give it a go. And I won a sausage roll. Super, I like their sausage rolls. They emailed me a link to click to print the label. And this is what I got: 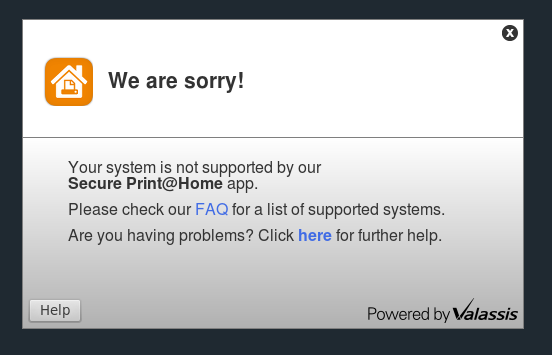 Clicking on the FAQ revealed that in order to print my coupon I had to install some software and for that I would need:

At this point I should have given up as I've got neither but I can spin up a Windows 7 VM so I did that. Half an hour later and a lot of swearing and I did, finally, manage to print the coupon.

Now I know we're weird here for only having Linux desktop machine but an increasing number of households now rely on Android tablets or iPads for their web access (not to mention phones) and there's also the Chromebook users. So it's not just us who're locked out of this promotion.

Given all of that I can't help thinking that the Valassis solution is one that's coming to the end of its useful life and that they are going to have to find another way.

What I don't know mind you.

And in any case if they're really scared of me printing more than one coupon (which I could have done if they sent me a PDF or an image) what's to stop me simply putting the coupon I have in a scanner?