As we're in the process of selling our house in Milton we need a solicitor, so I Googled for "Cambridge Conveyancing Solicitors" and got three top results thus: 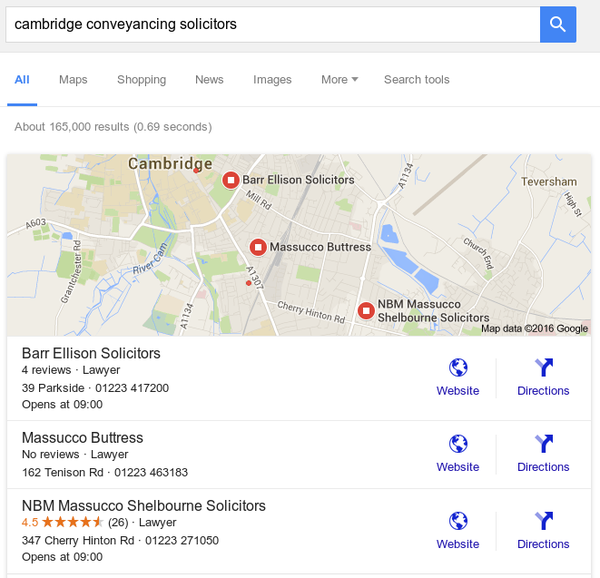 What was interesting was that NBM Massucco Shelbourne had got 26 reviews, with an average of 4.5/5 whereas the other two had no reviews at all. So I dug into it a bit by clicking on their entry and found something odd: most of the reviews are short and very positive but there's the odd one, like this one from Julie Kapur which is very detailed and negative. I'll quote it in full so you'll see what I mean:

We were very disappointed with how our solicitor (Mr Lacey, Cambridge branch) handled our selling request. There were some outstanding issues with the leaseholder, and it took 3 attempts and almost 3 months to resolve it only because the solicitor was very passive and unprofessional. Finally we did everything ourselves – chasing the council people up, bringing the correspondence to and from our solicitor, then he did something wrong again and we did all the procedure for the second time, and then he didn't do it correctly again, so we were repeating it again. Day before the contract exchange two more problems were detected and we were under huge pressure and were forced to buy indemnity policy, although we could have fixed the problem easily if the solicitor would tell about the problem three months before.
The solicitor's office is a real mess with piles of papers on the floor, chairs, everywhere. It looks like a miracle that he is able to find the necessary paper at all. We have heard all the news from our buyer and our seller, rather than from our solicitor. When I came in to handle our papers in I wasn't asked to come in and sit down. The solicitor would talk to me in the reception, going through all the papers briefly, taking some, returning the others, all was in a such hurry.
Later it was almost impossible to get through to him, the assistant would always say that he would call back, but he never did. On two occasions, we were asked to pay twice for the same service that we had already paid for. After my reminder, they agreed that we have already paid. This is not acceptable.
Below is the review from one of the NBM customers, and rather than writing the same, I am just quoting it and can certify that every word is correct:
The solicitors were awful at communicating. I would send emails and they were not answered. I would call, and no one picks up.
I waited days before i received any answers to any emails and even then i had to chase them by phone.

I only found out what was happening to my purchase through contact with the owners and with my sale through the estate agency. It was that bad!

When i did receive emails from the solicitors, they were never addressed to 'Dear sir/Mr/Mrs .. but they were written with no salutation and no 'good good buy/regards.! These people were astonishingly rude and unprofessional.

Even taking the price in to account, i would never recommend or use this company again. I am talking about Cambridge branch, others may be different, I have no experience, but I am not going to try them anyway.

So that was a bit odd. Even odder is that when you look at the many positive reviews one thing stick out which is the prevalence of none Anglo-Saxon origin names, which is odd for a firm based in Cambridge where the population is still not really that diverse.

Digging deeper it seemed odder still: without exception every one I looked at had only ever posted one Google review (unlike Julie Kapur above by the way) and those I could track down weren't UK residents. Take shapan sutradhar for example. Here's his review:

and here he is on Google+ and he "Attended sibnath high school, Lives in Tangail" which is in Bangladesh.

Others include oviman whose avatar is used for multiple people on Google+ can be found elsewhere (same name, same avatar) promoting a sinus home remedy in a comment to this YouTube video.

By the way in oviman's review of the firm:

Tom Carley and his team did an excellent job. They were extremely helpful, friendly and efficient and we wouldn't hesitate to use them again - an excellent team!

is a direct lift of a review by a Mr & Mrs D of Shefford, Bedfordshire on NBM's own web site:

It's almost as if someone was trying to game Google Reviews to both promote NBM Massucco Shelbourne and reduce the effect of the strongly negative reviews. Obviously this wouldn't be the firm themselves as that would be completely unethical but my experience does highlight how careful you have to be if relying on Google Reviews.