I've just got back from a trip south by train and the longest legs were done on down and up (or up and down if you're a train nerd) the east coast main line. The history of this service is that the previous franchise holders gave it up (I can't remember the precise details now) so for a while it was effectively re-nationalised and run as ECML.

And here's the thing, not only did they run a good service that people liked to use (it was my favourite UK main line train journey) but unlike most franchises, which are only profitable because we subsidise them, this one made a profit. For us.

So did the Government think "hmmmm ... that's interesting, perhaps we should re-nationalise some more?". Nope, they privatised it again. The winner was Virgin East Coast. Like most "Virgin" companies Branson provided the brand but the real expertise came from the other shareholder, our old friends Stagecoach. 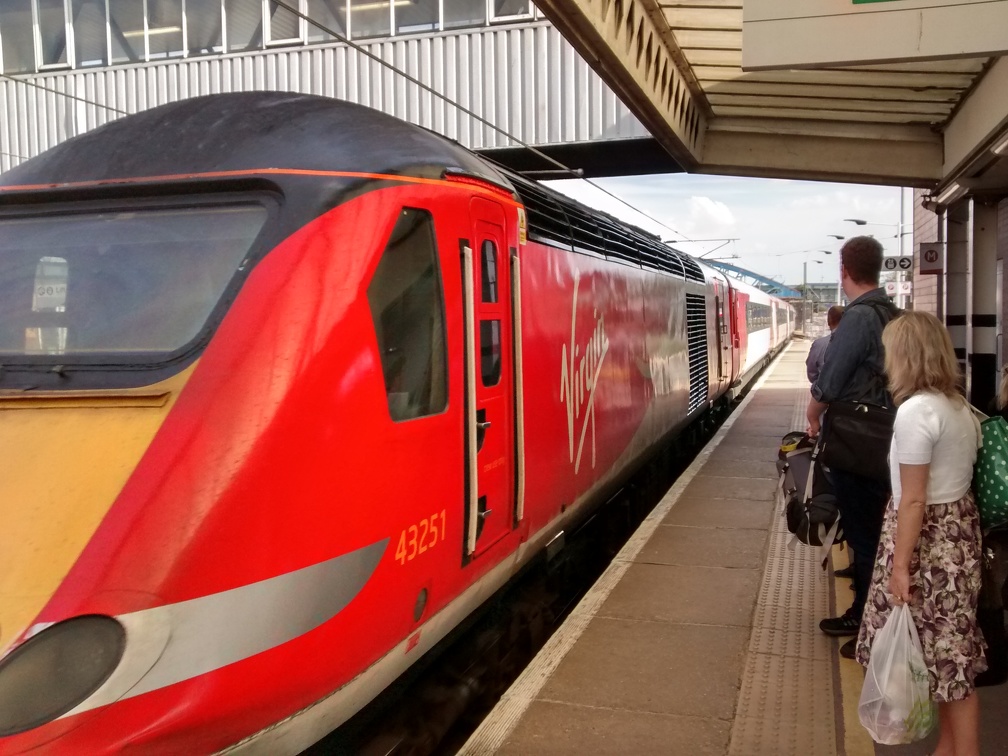 I'd already experienced a Virgin branded train service on the west coast main line and I didn't rate it compared to ECML so I wasn't optimistic.

At first I thought I was mistaken and the first couple of times I used it it seemed pretty much as before. But this time around I noticed the difference.

It comes down to simple stingyness (bearing in mind that I'm going First Class not Standard) and also a feeling that the staff were overworked.

So for a start as I was travelling from Edinburgh south from mid-afternoon arriving at London after 6pm and so with ECML we'd be offered a meal but what we were offered was, essentially, a light lunch. So the choices were: a hot sausage roll with a bit of chutney, a ham and chicken wrap, a hot smoked salmon salad, or ... something else (I forget).

I had the wrap, chosen in something of a rush as they threw the menus on the tables and were then back asking for our orders in less than a minute (I was seated close to the catering van so we were the first people in line to be fed). The wrap itself was ... disappointingly dry. A bit of mayo would have made all the difference.

We were also offered a cold drink ... and then within a minute or two a hot drink. Errrr ... what?

I spotted the man serving hot drinks also had slices of cake, not that he was offering them, but he did give me a slice when I asked.

That was pretty much it on the food other than the odd occasions when the hot drinks trolley went by when we were offered a biscuit. Which brings me on to the other thing. Visits from both hot and cold drinks trolley seemed rarer.

They journey back north from London to Inverness was little different other than getting two decidedly light meals rather than one and the first woman serving hot drinks didn't seem at all keen on offering the chocolates muffins which were lurking on the bottom of her trolley?

Overall I got the feeling that unlike in the days of ECML, when the ethos seemed to be "let's make our passengers happy" now it was "these are the portions allocated by the bean counters, that's what you get".

All of which makes sense because I've read that Virgin Trains East Coast are finding it hard to make a profit.

There is a postscript to this tale too: one of the things Virgin have done is replace the velour(?) seats with leather. Which wouldn't be a problem is it wasn't for the headrests which are stepped in from the line of the back rest. Nothing wrong with that in theory ... except that the height of the headrest didn't seem to be adjustable and, being 6'4" so having a longish back the bottom lip of the head rest, which was hard, was digging into my shoulders. So I spent most of the journey slumped low in my seat to get below the headrest. Luckily no one was sitting opposite me as my feet were well under the opposing seat!

Anyway next time I think I'll fly or go on the Caledonian Sleeper: the former is cheaper and quicker and the latter avoids losing a day travelling each end of the trip.