Yesterday Thomas Tallis: The Complete Works finally arrived on the doormat. The Guardian had this as a reader offer while I was sailing with Jenny so I cut the advert out and gave it to Beth as a potential birthday present but she got me other things instead, which were equally nice. So I ordered it myself. 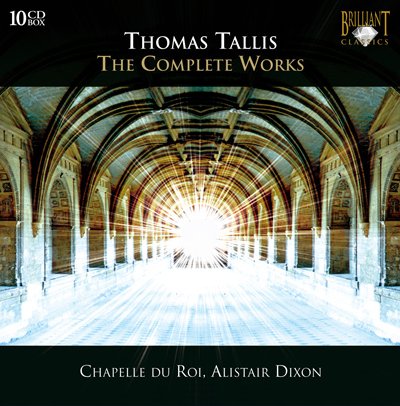 So what do you get? Ten CDs of Tallis. Alistair Dixon conducting, with the Chapelle du Roi doing the singing and the Charivari Agréable providing the playing for the instrumental works. It was recorded over eight years between 1996 and 2004 and is what it says on the box: all of Thomas Tallis' works (including some which were previously unrecorded). You also get the liner notes on a CD-ROM in the form of a 75 page Abode/PDF file so all 10 discs are now ripped and the liner notes are on the web server and the first CD "Music for Henry VIII" is washing over me as I type.

Tallis is new to me on my own CDs although I've got some of his pupil William Byrd's work as performed by King's College choir1 on a couple of CDs. I've been meaning to get some Tallis of my own since hearing a programme on BBC R4 which featured Tallis' "Spem in alium". I was hooked and needed to own a copy.

However it's on disc 6 of this set so I've got a while to wait yet though.