I was taking some photos of the village war memorial today for the parish council, they're online here, and in response the clerk sent me a scan of a photo he has of the dedication of the war memorial in 1922. 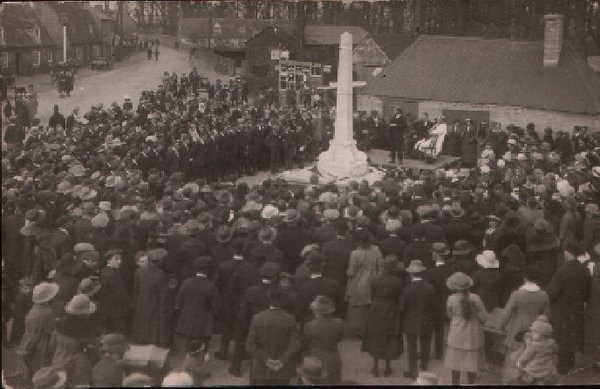 Milton wasn't a big place then and I suspect you're seeing most of the village there. It was only four years after the war had ended and Milton had lost nineteen1 of it's young men to the conflict so it must still have been pretty raw in people's minds.

If you're local you may also wonder about the location. The war memorial used to sit in the middle of what is now Ely Road as the road north through Milton followed the line of the road still called High Street, which veers off left at that point towards Landbeach.

That changed in the early sixties when Ely Road was built across the western edge of Milton Hall's grounds2, to take the increasing volume of traffic down the A10 trunk road as it passed through the village. The war memorial, which was sited in its path, had to be moved to where it sits now, on the corner of Fen Road and Coles Road.