I talked here before about using my friend's sumatriptan injector and how successful it was. She actually gave me two more so when the migs flared up again I used one and, although it wasn't as quick as the first time, the whole episode last only a couple of hours rather than the usual ten to eighteen.

So last Wednesday, fed up with the continuing run of migs every 2-4 days, I phoned our surgery and a duty doctor phoned me back. I told him about my previous experience and he said there was no problem with prescribing them to me so I now have my first two of my own! 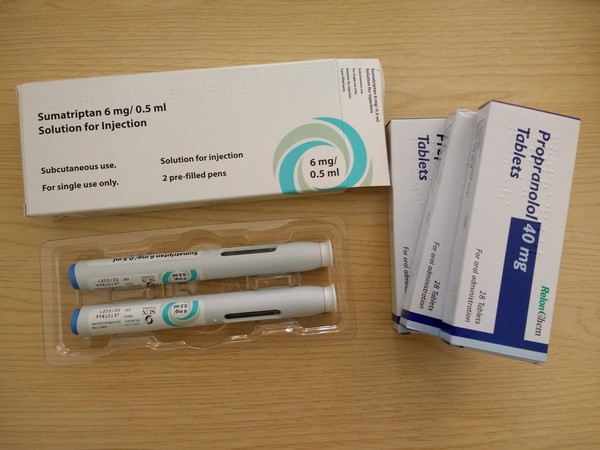 He also asked me about propranolol for prophylaxis which I tried very briefly early this year but then gave up on as it didn't seem to be helping. He thought the previous GP I'd spoken to had under prescribed (40mg/day). He said I needed to be on more and, given the intermittent nature of my migs, to try for longer - he suggested six months - and to keep a diary (which I do anyway using the Migraine Buddy app). So he's started me on 40mg three times a day. Assuming I have no problems with that then next month he'll switch me to 80mg of slow release (it has a short half life normally, hence 3 x 40mg of quicker release) for the next five months.

I'm a bit dubious about propranolol, not least because a common side effect is weight gain - something I'm only just recovering from post sodium valproate - but it's got to be worth a go as propranolol does have a good success rate for prophylaxis.