I'd been loaded some old negatives, mainly 120 film format which I wanted to get scanned as they were from an old village family called Conder and there was a suspicion that they might be photos of the village we could add to the Milton Photo Archive. 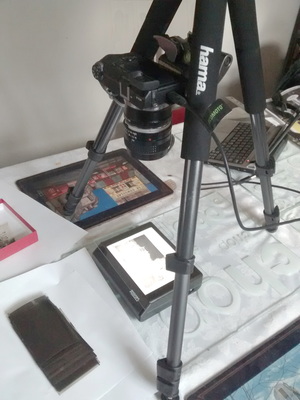 Stephen from the photo club suggested using a light box and photographing them as no one I spoke to had a negative scanner large enough so today I set up a rig with my Sony NEX-6 with my legacy Minolta 35mm manual focus prime on slung under Beth's tripod1 over Jerry's (another club member) light box.

Once I'd got the focus right (fairly easy to do with the NEX-6's focus peaking2) I dropped each negative onto the lightbox in turn, put a sheet of plain glass over it and then used my phone(!) connected via WiFi to release the shutter to avoid any shake as I was taking at 1/10s or less.

55 negatives and one print quickly digitized. The only thing I got wrong was on 50% of the early ones I photographed them the wrong way up (they need to be shiny side up) but I fixed that later with The Gimp.

Then I used mogrify -negate to flip them to "positives" followed by many hours spent cropping, rotating, adjusting levels, applying masks (thanks to Beth for the lesson on how to do that), cloning and smudging.

Some of them, when the photographer had a good strong light so could stop down and use short exposures, are rather fine: sharp and with good dynamic range as in the example I'm attaching to this post.

Anyway, here's 41 of the more interesting ones in a album on tallpaul.org.