I've already wibbling on about this on facebook so apologies if you've already seen me mention this already but I've just signed up for a SIM with giffgaff. Stupid name, strange proposition but essentially they're offering a connection on O2's network with very reasonable pricing (8p/min to mobiles and landlines, 4p texts, same as Tesco apparently, and free to other phones on giffgaff including video calls1). 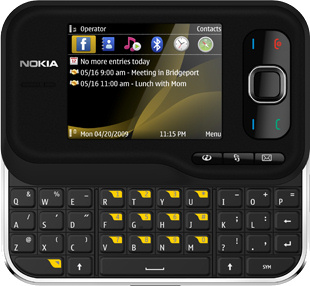 It's a pay as you go (PAYG) SIM. Now I'm a fan of PAYG as I just don't do the calls to justify a contract but having to top up (as I do with Vodafone) is a pain. But with this bunch you can set high and low watermarks and it does it for you (and sends you an SMS when it does). That's nice.

But what really grabbed my attention was 100MB a day of data for free for the first six months so long as you top up at least £10 every three months.

I was already eyeing up a Nokia 6760 Slide as my Christmas present to me and I really needed a data contract of some sort for that. This was perfect.

Why the Nokia 6760? Well, it's got a proper keyboard, and all the reviews really rate it for text entry. I don't get on that well with T9: it's OK for entering a short SMS but whenever I need to reply to email I end up picking up the phone. That sucks. I've also never really got on with soft keyboards (as now found on the iPhone and most Android phones).

It also runs Symbian S60 so there's a good number of free apps including for example Google Maps, which can read position off the A-GPS on the phone.

Oh yeah, and giffgaff have a "refer a friend" scheme so if you're tempted to sign up too then let me do it for you and you get a £5 credit on your account and I get a £5 introduction fee. Result.