Today I bring you two great media people in one posting. Robert Llewellyn started Llewtube a while ago now. The idea is simple: he gives someone famous a lift in his car and chats to them while he does so. Then he puts the interview on his web site.

That's all there is to it: just Llewellyn1 giving the person a lift somewhere. There's no one else involved. He uses three of those tiny cameras you can get now: one at the bottom of each of the A pillars pointing across the car at him and his passenger, one on the rear parcel shelf looking forward so you've got a view of the back of their heads looking out which he cuts to occasionally when he's doing his post production editing. So other than having to wear a tiny clip on mic the interviewee is just being given a lift and having a chat with a bloke who gets on well with people. No cameraman. No production team.

And it works. Surprisingly well. I think part of the reason is does is that it's so informal and the conversation can wander wherever it wants.

Anyway that brings me on to the second person. I've not checked his site for a while so it was only while looking at another site that I discovered he'd had the lovely Dr Alice Roberts in his car. So here's that interview. Enjoy. 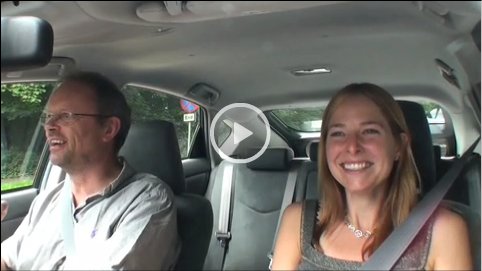 Rumour has it that Carpool, which is Llewtube's proper name, is going to TV soon. I suspect it won't be the same as interviewees start to take it more seriously and be on their best behaviour but we will see.