I am notoriously bad at leaving food festering at the back of cupboards and treating use by dates as merely indicative if they're in months rather than precisely dated. 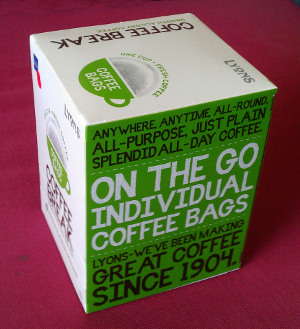 In my experience most preserving processes, like bottling and canning, mean the food lasts more or less forever, for reasonable values of "forever". It may become less palatable, or a bit less fizzy in the case of bier, but it seldom "goes off".

Which brings me to the subject of this post: Lyons "Coffee Break" coffee bags. These are pretty good if you're an occasional coffee drinker like me. They're individual coffee bags, like giant tea bags and you stick one in your mug, pour boiling water over it, leave for five minutes and a get a pretty decent cup of coffee. Probably not that economical but a box of 18 will perhaps last me a year1.

Each coffee bag is individually foil wrapped to keep it fresh, which is good as you don't need to keep the box in the fridge2.

This morning I fancied a coffee with breakfast so I opened the box and it was the last one. Fine. Had coffee, flattened the box, put it and the foil wrapper in re-cycling bin and the coffee bag in the composting bin.

Afterwards I was on the phone to Beth and mentioned this and we were joking about what the use by date would be on the box so I wandered into the kitchen and fished the box out of the re-cycling bin only to find this3:

How we laughed. I speculated that it really meant 2014 (which seemed plausible as the box has probably been here for about a year which would make its total life 2.5 years).

Anyway, not to worry, I had to go to Tesco anyway to do a little shop so I walked up there and picked up another box. In the store I looked at it and giggled and as soon as I got home I took this photo: