I've wibbled on before about WalkLakes - the site Beth and I have created about walking in the Lake District. It's going pretty well. Beth's researched a lot of walks so we have good content both for that and lots of peripheral pages too so we are getting quite a respectable about of traffic now. Which is a good thing as that's how the site is going to make us money.

We saw our audience rise steadily through the year peaking late in the school summer holidays but pleasingly it's stabilised and not dropped back that much even now we're well into the autumn which bodes well for next year. 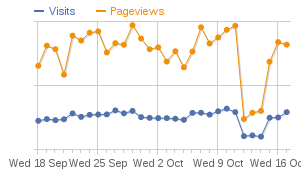 Well, that was true until last Saturday. This plot from our Piwik analytics reveals all. We suddenly saw a drop of 76% in page views from the day before. What was going on? As it happens I'd been doing very little with the site on Friday as I was busy on another project so I'd not broken it. I wondered if it could be our iptables blocking rules but they looked fine.

Eventually we tracked it down to Google: they had heavily demoted the site for some reason. Not sure why but, for example "lake district walks" where we used to be at position 8 we were now at 28 (and once you're off page 1 i.e. > 10, you're lost). We were still OK for very specific searches where we were at position 1 before; we were still at position 1 there, but once there was any sensible competition for a string we were stuffed.

As you can see this continued the following day while I scratched about trying to work out why we had been demoted and what, if anything, we could do about it. Reading various forums talked about SEO this seems to be a common occurrence. There are things you can do to help, sometimes, but we had already done all of those.

So in the end we largely had to sit on our hands and wait.

We did that on Monday and come Tuesday, after three days of appalling stats, we were back pretty much to normal as the chart shows. 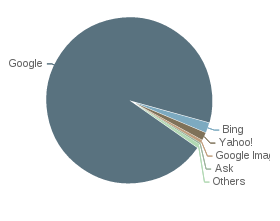 The moral to this tale for me is that we are currently very much in thrall to Google. I kind of knew this already: Piwik's pie chart of visits by search engine for September 2013 shows where we are only too clearly.

It's not that we aren't searchable in other engines; we are, in fact we return better results for some queries on engines like Yahoo! and Bing, but no one is really using them.

We can't do anything about people's choice of search engine. What we can do is try to get them onto the site via other routes. So that means more work posting to Twitter, where we now have 730+ followers of which an increasing number are now not businesses doing follow exchanges but real walkers and other lovers of Lakeland, facebook which has been slower to take off but where we now have 90+ followers, and Google+ not to mention Tumblr and Pinterest. But it all takes time and although we've managed to automate some of it - so for example we can post a photo to Google+ and it pops up automagically on Tumblr, Twitter and facebook and we can post news to the site itself and it pops up on Twitter and facebook - it's still a lot of work and some of it has to be done by hand. For example one can't automatically post into Google+, we have to do that by hand as there's no API.

I've also tweaked our mapping software so that if anyone searches for anywhere in the Lake District then, the first time they do that, they get a popup inviting them to visit WalkLakes and again Piwik confirms that is bringing us visitors.

The other thing we keep forgetting is real life marketing. So for example today we had a friend around who said she'd mentioned the site to a few people but what we really needed was some business cards. We laughed: we've got lots - we got them printed for Beth to hand out to people she met while researching walks. 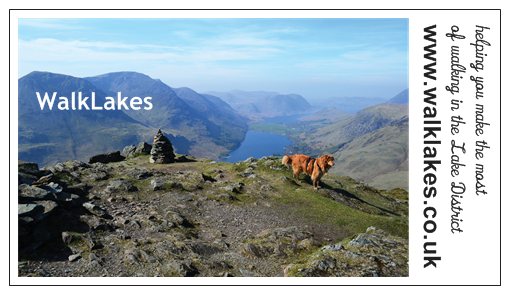 So I gave her a handful to pass on (and if you would like some do say; as I said: we've got lots).