An article in The Register today made me realise that the annoying search widget which Google had inflicted on me in Android 4.n was rather more than I thought but was actually a Siri competitor.

I had a play with it on my phone and the way it works is that it listens to what you say, sends it across the Net to Google's servers to do the speech recognition, and then acts on the results. It knows basic phrases. So for example if you say "wake me up at 8am" it says "setting alarm" (English accented woman) and the dialogue you can see below appears (this is after I've stopped it doing it: it gives you a few seconds grace before it actually does the action). 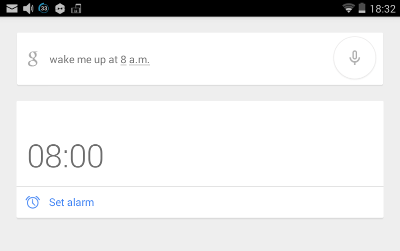 Which is all very fine. It knows about location based searches too so "find me a coffee shop" returned hits local to me using Google Maps including the café at Milton Country Park. It only failed on me once. I said "I want to buy a sandwich" and it interpreted that as "I want to buy a cemetery". As it had nothing location based to offer, nor any actions using the Google software I have like adding an entry to my diary or setting an alarm, it fell back on doing a Google search for that string.

And this is where the minor peril lies.