In my last post I was talking about Violet Tweedale and said I could find no reference to her and Clarens staying at Milton Hall. But now that I've downloaded Ghosts I Have Seen from Project Gutenberg I have it. 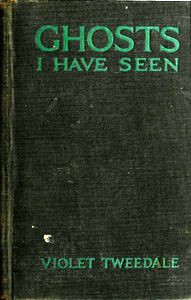 Here she is at the start of chapter VIII "Some Strange Events":

After my marriage my husband and I passed some time in the United States and Canada; we then returned to England and took a place in Cambridgeshire.

So that, I rather suspect, is Milton Hall and that means she was there some time after 1891 which is when she married. A little later she says:

A year after the event I have recounted above, I was resting one afternoon in the summer-time. I had been ill, and was not yet strong enough to lead an ordinary life, and I was lying on a sofa in a top floor room. The room immediately beneath me was the drawing-room, and the weather being hot all the windows were wide open. The house we inhabited was quite isolated in its own park, and the village was about half a mile distant.

That village would be Milton then and, yes, she heard a piano playing ghost there that day.

Incidentally that book also helps confirm the strong suggestion that Chummie, who the gravestone commemorates, was a dog as she writes about her dogs too and also their habit of erecting gravestones. She says in chapter IX, "Pompey and the Duchess" (my underlining):

Twice in my life I have seen the wraith of our own dogs, "Pompey" and "Triff." Pompey was a big brindled bulldog of terrifying aspect and angelic nature. My husband and I adored him, and his death caused us great grief. Indeed, the whole household mourned him long and deeply. One day, about ten days after his death, I suddenly caught sight of him walking in front of me down the avenue. [...]

Our next dog, "Triff," was a very handsome sable collie. Of course, we became devoted to him, and when he also passed away we felt very desolate without him.

For a long time I never could feel that he had left me. Though I could not see him, I used to speak to him, just as if I could see the dear presence I so strongly felt. It was hard that I never could catch a glimpse of him, because others did. The butler saw him many times, and my maid caught sight of him twice.

Given those dates they had Pompey from when they married until 1902, and then Triff, so Chummie must be after that. All of which means she was living in Milton Hall some time after 1903. We don't know when she arrived but I'm assuming that would have been some time in the 1890s. Having said that there's no sign of Pompey's gravestone there, so perhaps she was bimbling around on the other side of the pond for rather longer than the book implies.