Last weekend, being our1 birthday weekend, saw me heading south to Cambridge and then afterwards on to Hampshire to see the family. I normally make this trip by train but Easyjet fly out of Inverness Airport (which in reality is mid way between Nairn and Inverness) to Gatwick, Luton, and Bristol and they are ludicrously cheap, especially if you book early, offer reserved seats with leg room for lanky flyers like me, and even allowing for waiting about and train connections the journey takes half a day less.

Although Luton is geographically nearer to Cambridge because of the way the railways are laid out in this country it was quicker to fly to Gatwick, and the plane also left at a more civilised hour.

So the plan was to fly south on Thursday afternoon, leaving at 3pm and arriving at Gatwick at 4:40pm which should mean I could get to Cambridge by 7:30pm in time for a dinner date with friends at a restaurant near the train station.

Sadly that didn't come to pass. We hit a bird as we took off from Inverness. There was some vibration but that was all and, to be honest, having not flown in a jet since the last millennium I thought that was normal. It was't until after we'd turned over Nairn and got up into the cloud that I got suspicious as we didn't seem to be going up any more.

So I got my phone up and fired up the GPS app and, yup, we'd levelled out at 8,000ft. That wasn't right. Then we headed north so I was sure we had a problem. Shortly afterwards a call came out over the tannoy "cabin crew to xxxx" (I didn't catch the last word) and they got out of their jump seats and stood by the exits ... 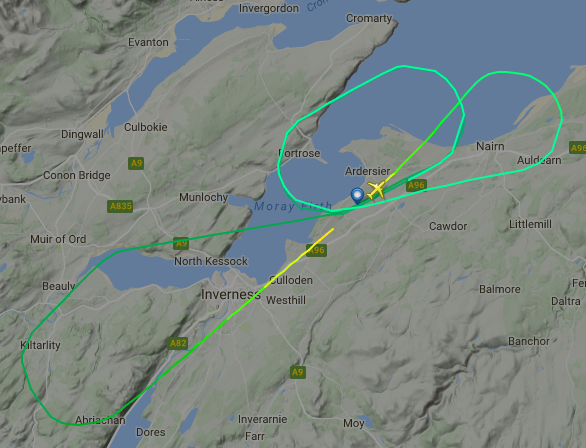 Then the captain came on and explained what had happened and that we had to head back to Inverness. Cutting a long story short we did that, after a couple of circles over the Moray Firth as you can see from the flight plot above, and once back in Inverness they decided the plane would have to be taken out of service and they would have to fly in a replacement plane from Gatwick.

So that was all the excitement, such as it was. The BBC covered the story as did various other news outlets including the Mail Online (spit!) and the Evening Standard.

As the flight now wasn't going to arrive at Gatwick until after after 10pm that meant the earliest I could get to Cambridge was 12:30am and that wasn't really fair on the people I was staying with so after some negotiation with Easyjet to ensure I could get a refund on the ticket I booked on the Caledonian Sleeper (you've got to love the Internet, it makes this so easy) and went south on that instead getting to Cambridge on Friday morning before 10am.

The journey back, which started from Fleet, went much as planned. I took a train to Clapham Junction and from there picked one up which went through to Gatwick.

The down side on this leg however was Gatwick North terminal. Part of this is that I had allowed far too much time, this being my first trip, so I was hanging around in Departures for a couple of hours. It was continuously noisy from a combination of people plus tannoy announcements.

I'd scoped out in advance that there was a "quiet zone", something which we'd used with success on the CalMac ferry to Islay earlier this year, but in this case the key word was "zone". It was just some seats in a corner of Departures. Still the tannoy, still much of the sound from the shops each side.

On top of that various people waiting there couldn't read English (or pretended not to) and thought this was the ideal place to make phone calls from - it being marginally quieter! I finally snapped when a Russian woman immediately behind me started on her second Skype call. I stood in front of her and "hushed" her while pointing at the huge sign on the wall saying "quiet zone".

The flight back, once it departed, which it did about 25 minutes late, was pretty dull other than that the seat was a bit hard on the bum.

Anyway, what do I conclude from all of this?

Well, despite the bird strike going south on Easyjet seems like a good way to go. It's quick and cheap and now I know how long it takes to get through security and how the queuing works I really can turn up an hour before the flight.

Using Easyjet to come home I'm less convinced by. For a start there's the stress of public transport to get there. Southern Trains staff were on an overtime ban, there were speed restrictions on the lines due to the heat, and there are ongoing signalling issues just outside Waterloo which was affecting services all over the place. This sort of thing isn't unusual and means I need to allow a lot of time on hand at Gatwick. And sitting in Gatwick Departures is pants.

So for future trips I can see myself flying down and then taking the midday Highland Chieftain Virgin train back (it's the only one that goes all the way through to Inverness without any need to change).

Photo of Airbus A320-214 Easyjet G-EZTH by Curimedia CC BY 2.0, via Wikimedia Commons