My trusty Tesco Hudl 2 died a little while ago. It was a bargain when I bought it and was an excellent 8" Android tablet. So I was left looking around for another and, as it happened, Amazon chose that week to launch the 2017 edition of the Amazon Fire HD 8. 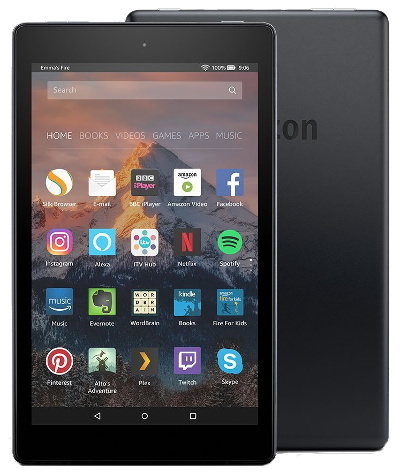 Now there is a catch to all the Amazon Fire tablets and that is that they run Amazon's fork of Android which they call Fire OS. The version they're currently shipping 5.4.0.0 is a fork of Android 5.0 (API level 22) which is pretty much where I was with the Hudl so I could live with that.

But that's just the start: they also use a very clunky launcher (it looks worse than the photo above), they have their own app store which is rather empty compared to Google's, and (assuming you don't pay them an extra £10) the lock screen shows you special offers from Amazon.

So, with grateful thanks to the folks on the /r/kindlefire sub on reddit, here's a quick summary of how to turn your Amazon Fire HD 8 into a generic Android tablet. You don't need to root it (indeed as far as I'm aware no one has yet succeeded in rooting an Amazon Fire tablet).

So there you have it, I've got an Android tablet, with Alexa on, for a penny under £80. Result.