We had a very pleasant day today exploring Norwich. It's the second time we've been but last time it was raining so we didn't do much. This time, once we'd done our shopping, we had a good wander around.

I wish I'd brought my proper camera, as it is you'll have to make do with these pictures from my phone. 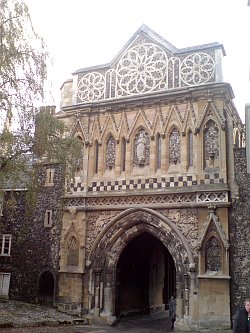 Norwich is, we soon discovered, a lovely mix of the very old, well preserved buildings from the last century, and the brand spanking new.

For the old there's still bits of the city wall all over the place and, while walking along the river, we discovered the Cow Tower a fourteenth century artillery tower which formed part of the city's defenses.

But the best bit is probably the cathedral close. Once you step through the gate (pictured right) into the close the noise of the city is left behind and by far the loudest noise is smartly dressed children (from the cathedral choir school I suspect) scurrying past.

You can walk through the close down to the water gate at the river edge and from there there's a riverside path through the town.

As we walked along that path we were particularly impressed with Quayside. 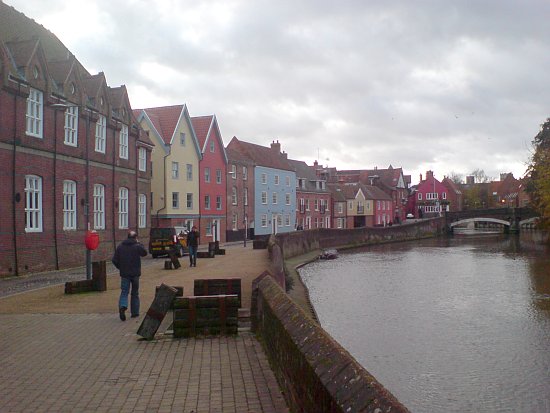 This clearly was the old town quay and some of the building are very old but in between they've replaced some buildings but in a very sympathetic way. And the way some of the houses are rendered with bright colours reminded us of Tobermoray on Mull.

As a sample of the last century buildings here's Lloyds Bank overlooking the market square. I just love that Portland stone look. The buildings next to it aren't bad either. 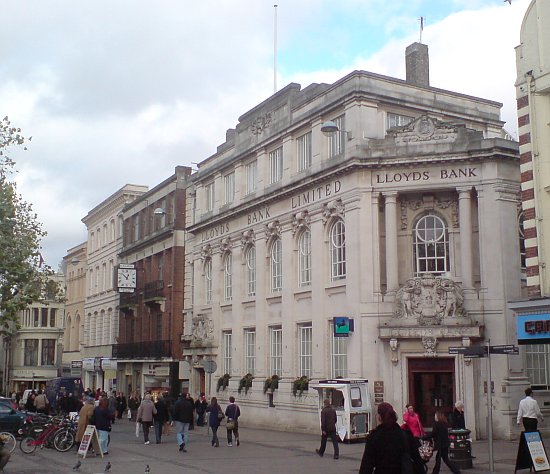 Getting right up to date here's The Forum. Built at the cost of around £100 million on the site of the former Central Library which was destroyed by fire in 1994 it was opened to the public in November 2001. It's bigger than it looks at first glance: look at the people coming out of the door: 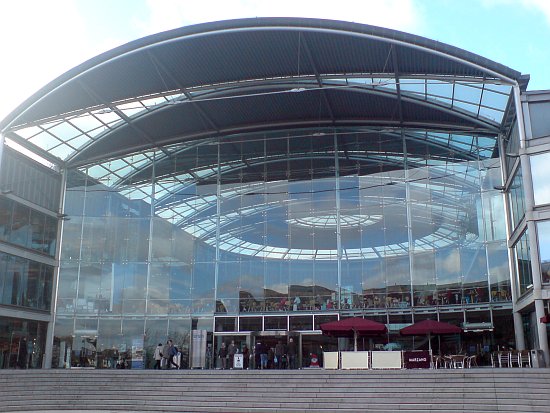 It's a great space with a ceiling which lets a lot of natural light in. There's offices around the sides, including BBC studios, the library at the back and cafés at the front, including a Pizza Express on a mezzanine over the entrance. 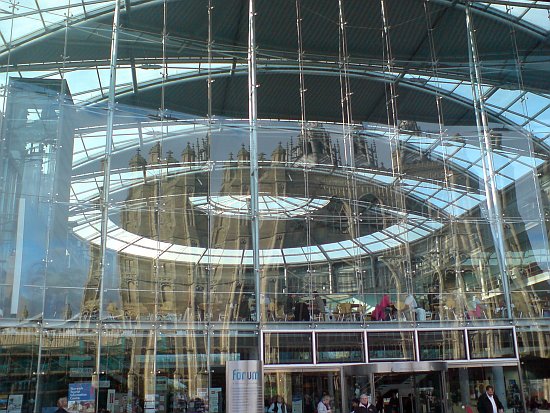 It's a difficult building to photograph with my camera phone but this second shot came out better than I expected with the church of St Peter Mancroft which stands opposite it reflected in the glass.

But what really struck us about Norwich was how much better it was for shopping than Cambridge. Barely a mobile phone shop to be seen, and although there were lots of cafés they were largely non-chain. 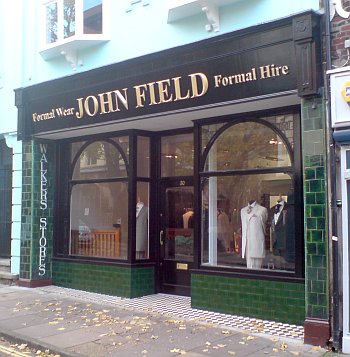 There were also lots of interesting shops, like this traditional men's tailor (just check out that gorgeous green tiling), wedding shops, record shops (I saw at least two which were buying and selling vinyl), shops selling clothes I might want to buy (and indeed we did), and a covered market which was full of stalls selling everything imaginable.

In the heart of it were the food stalls and while Beth had a bag of chips (which she pronounced to be very fine and a bargain) I gravitated to the mushy peas stall.

It claimed to sell pie and peas but I soon discovered that in Norfolk that means an ordinary fish and chip shop type pie, not a pork pie ("like in the North, we don't do that here, it's Norfolk").

So I had a chicken and mushroom pie covered in mushy peas. It was the best £2.60 I've spent in a while.

So all in all we had a jolly time in Norwich and I recommend it if you want a day out which can combine a different shopping experience with some excellent architecture and history.