Haslet is once of those meats that's been around since my childhood. My mother used to buy it regularly and I rediscovered it when I found that our local Tesco sold it. If you've not come across it before essentially it's essentially sage and onion pork sausage meat cooked and sliced.

Tesco seem to have stopped selling it now. Help was at hand however. We were in Ely a few weeks ago and discovered they've got a pork butcher: Edis of Ely1.

Pork butchers are a pretty rare breed these days. This one sells every sort of pork joint you could possibly want and a wide range of pork products including sausage rolls (with flaky or shortcrust pastry), pork pies in a variety of sizes, and ... haslet.

They sell it sliced but also half or whole. And so it was that I got to see, and buy, my first whole haslet!

I failed to take a photo of that one but we went back there last weekend and bought two and as I was chopping them into thirds to go in the freezer I remembered to photograph the second one before I took the knife to it. 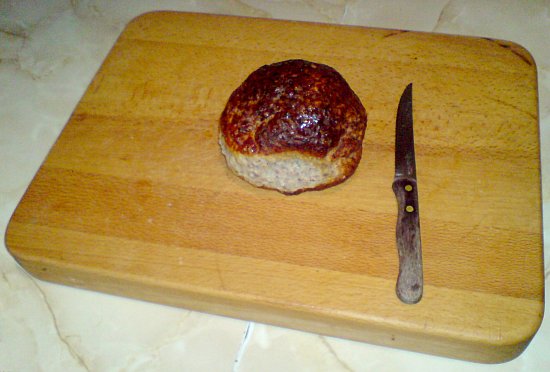 Wikipedia claims that haslet is originally from Lincolnshire, although it was certainly about in Hampshire when I was a kid. Apparently it's traditionally made from the pig's entrails. Yum!