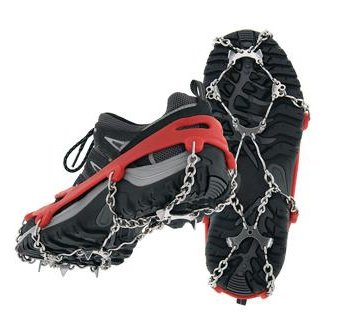 but my Kahtoola Microspikes arrived today and there's three little tales to tell about them so here goes.

First a bit of background. The microspikes, as you can see from the photo, are essentially snow chains for shoes. They use an elastomer harness that sits on the shoe to hold a web of chains on the sole and the Web includes four plates with two spikes on each on the front pad and one larger plate with a two spikes on the heel.

The result is that you can walk on hard packed snow and ice without slipping. At all.

You can walk on hard surfaces wearing them - to cross a bit of bare tarmac for example - but you wouldn't want to do that for long.

So, my three tales.

Firstly a big recommendation for The Climbers Shop. Beth had bought a pair of microspikes from them earlier in the week and was very impressed by them. I'd previously been less convinced (having only seen them on the Web) but in the flesh they looked good so I ordered a pair from The Climbers Shop on Wednesday at 13:16.

Bear in mind that Wednesday was 23rd December. By then their Web site (which was offering free shipping) was saying they would guarantee to deliver anything ordered by midday on Tuesday i.e. a day earlier so I was far too late to get pre-Christmas delivery. I wasn't concerned: I knew they wouldn't arrive before Christmas and that by the time they did the snow and ice would be gone but I wanted them for next time.

But here's the thing: The Climbers Shop had them out of the door and in a Post Office van before 14:00 and they upgraded delivery to next day without charging me for it and they arrived just after lunch today! I'd not asked them to do that but they did it anyway. Most impressed. Will definitely be using them again.

So do they work? Well, to be honest the ice and snow is melting so I didn't think we'd need them but we both put them in our pocket anyway as I wanted to try mine in the park.

But I was wrong: in fact the pavements were a nightmare. What's left on the pavements now is thick ice and as it's melting there's a veneer of water on it so it's very slippy and dangerous. We got a couple of hundred yards before we stopped and put our microspikes on.

What a transformation! It was like crunching through soft snow. Super.

Which brings us to what was almost an unhappy ending. There we were in the Country Park and we got chatting to a chap with a big golden retriever. She was very bouncy but was on the lead - one of those extending ones. As I stepped forward she was out of my sight for a second behind Beth and when she reappeared she was barrelling forward and took my legs out from under me and I sprawled on to the path.

Just for a second as I lay there I thought I'd broken my wrist but I'd just twisted it and it's fine now, if a little sore.

But it would have been a bizarre end to the day to have solved the slipping on the ice problem only have my wrist broken by an out of control dog!