Now that my mapping software is on the Walkhighlands site I've been able to look again at some tracks from my GPS on 1:25,000 and compare with the 1:50,000. It's been interesting. As you can see we walked up White Fen Droveway, turned right onto a byway, then left to walk under the pylons up to the point where we crossed a track and appear to start yomping across a field (it's actually the National Trust's newly acquired White Fen which is why it's not on the map yet). 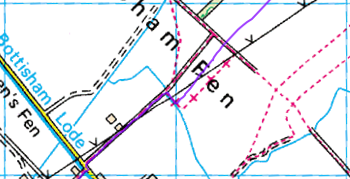 It's immediately obvious that the byway has been drawn on the map in the wrong place! It's quite significantly wrong too: twice the distance from the droveway and it now ends where the pylons met the cross track as opposed to you having to walk under the pylons which must be about 100m from the correct position.

Similarly later on the same walk we appear to be walking on the wrong side of the lode (a a small Fen river/canal).

This confirms something we've suspected for a while which is that 1:50,000 maps cannot be relied on if accuracy is important: if you had entered the end of that byway as a waypoint based on 1:50,000 mapping your GPS would have taken you to a point 100m away from the correct place. It doesn't matter much here in the Fens but on "interesting" terrain in Scotland it could be the difference between a safe point and a very dangerous one.

So if you are going route planning and waypoint positioning is critical then don't do it using 1:50,000 maps!