I've tried hard to stay out of local politics of late but we've got a district council election coming up this May and the latest Tory leaflets leave me feeling it's time that I reacted publicly to what's been said.

First some background if you're new to this. On the edge of Milton, the village where I live is a country park made from old gravel pits. Milton Country Park was created by South Cambridgeshire District Council (SCDC) about 15 years ago. In their accounts it cost them about £300,000 a year to run although the real costs on the ground were more like £150,000, the rest were charges incurred elsewhere. Be that as it may SCDC was short of money and identified the Park as something it needed to divest itself of and late in 2006 the cabinet decided that if they couldn't find anyone to take it on by 31st August 2007 they would close the Park.

And so began the campaign to Save Milton Country Park.

The campaign was supported by the Friends of Milton Country Park and Milton Parish Council and lead by Stephen Bennett, chair of the Friends, and me backed up by a strong campaign committee and the active support of our district councillors. For the next six months we worked flat out of saving the Park. We set up the campaign web site, organised an online petition, did numerous interviews on TV and radio, and photo ops for the local press. We attended and spoke at many meetings, both public and private. One of our district councillors, Richard Summerfield, deserves particular praise in this regard as he spent a lot of time helping steer me in the right direction and attending meetings with me to put our case. We even investigated setting up an organisation to run the Park ourselves. I could write a book.

For me personally it was a hard struggle and not just because of my health. It also cost me two customers because I was so busy working on the campaign I didn't really give them the attention they deserved.

But it was worth it in the end: we made SCDC realise that the Park wasn't only of interest to a few people in Milton but was widely used and supported all over the area. Indeed only about 40% of supporters lived in SCDC, about 40% lived in the Cambridge City and 20% came from further afield. So SCDC softened their stance and found someone to take on the Park.

So why do I bring this up again now?

Well the Tory candidate at our local election seems to like re-inventing history. It's been going on for a while now and I could start with some earlier leaflets but let's just look at the latest two which were given to me by her agent on the doorstep on Friday night. The first says:

She played a large part in saving Milton Country Park, campaigning against the closure, and raising funds for the park.

Milton Country Park. This has been a real success story. I was involved with 'save the Park' from the beginning - and am delighted that all the hard work to retain it has paid dividends.

Hmmm ... well it's strange because that's not how I remember it. And I was there.

What actually happened was that the campaign (which wasn't called "save the Park" but "Save Milton Country Park") began in mid-December 2006 with the official launch on 3rd January although we had spent a lot of time over Christmas working on it.

There was a district council election in May 2007 and this was obviously going to be an issue in the village and in mid-January the Tory candidate and her agent turned up on my doorstep asking what they could do to help. So "from the beginning" is a bit wide of the mark. 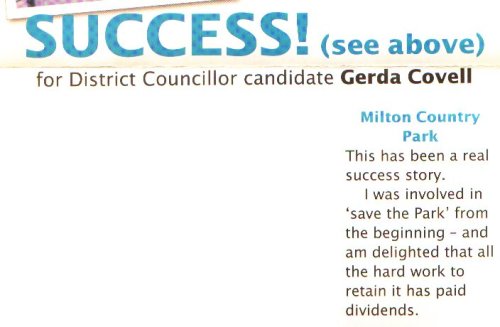 As for playing "a large part in saving Milton Country Park", being "involved" and "campaigning" I didn't see any real sign of that with one exception which I'll return to in a minute.

What I did ask her to do when they came to see me was to work with us and specifically, since SCDC was Tory controlled, to use her influence within the party. And to be fair to her she did meet with the portfolio holder on SCDC's cabinet to discuss the issue ... and had a photo taken for her campaign leaflets, but that's politics for you. Subsequent leaflets made great play about how she was campaigning to save the Park but all it seemed to amount to was to repeat the message that she had spoken to the portfolio holder.

The one thing I didn't encourage her to do was to raise funds for the park which, as you'll see above, she claimed to have gone on to do.

That may seem like an odd thing for me to have done but let me explain it to you like this: we spent a lot of time looking at the accounts of the Park and the bottom line was that its expenditure exceeded its income considerably and that even for the model we were considering for running the Park there would be a shortfall of over £50,000 a year.

So although people holding local fund raising events was very sweet it really wasn't the best use of their time which could better be spent doing things that had some hope of saving the Park.

In fund raising terms that meant looking for large funders willing to put in a lot of money both for ongoing expenditure and for capital projects. That's something we spent a lot of time talking to people about and we succeeded in finding a donor willing to offer revenue funding for at least three years to cover our costs if we took the Park on and possible capital funding in the order of £500,000 for re-building the visitor centre so that it could produce considerably more income.

Anyway without consulting us she launched her fund raising event, a dance and disco at the community centre. The first we knew of it was when supporters started to contact us about it. We ended up having to post this disclaimer on our web site explaining it was nothing to do with us.

And that would be the end of this sorry tale if it wasn't for what happened afterwards. She had solicited donations from local companies and one of them wrote her a generous cheque made payable to "Save Milton Country Park" so eventually that was given to the campaign. It was the only contribution we got from the dance so what happened to whatever other money they raised I don't know, perhaps it was given directly to SCDC?

As for that cheque. It bounced.