So VAT increased from 17.5% to 20% on a lot of goods today and it's been interesting to watch the fall out. First from those who can't do percentages.

Take The Independent's Simon Read, a financial journalist who last month claimed that:

The increase will add 2.5 per cent to the cost of many goods and services so buying now to avoid the higher price can, on the face of it, seem sensible.

He's not alone in confusing the increase with the percentage price rise which has resulted from the increase in the rate1. That rise is actually just over 2.1% of course.

But it's not that simple. 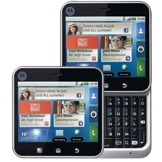 Here's Expansys for example. I've been idly looking for a new phone2 and took a shine to the Motorola Flipout. Last weekend they had it in their sale for £169.99. I had an email this morning saying "we're having a VAT freeze until 31st January". So I wandered over to their site again and there's the Flipout for ... £173.99! So it's gone up in price by 2.35%.

So is that a random price increase, or an overenthusiastic application of the VAT increase or what? I suspect it's because (despite the claim) they have applied the VAT increase and then, because they like their prices to end ".99" their pricing software has rounded up to the nearest ".99".

I think we're going to see a lot of that over the next few months as shops re-price their stock. They like prices to end with neat amount of pennies, typically either zero, ninety five or ninety nine.

What do you think are the chances that they'll round to the nearest rather than rounding up like Expansys have done?

So prices are going to rise as a result of the VAT increase, and it looks like we're going to get gouged by more than 2.1% but what really interests me is the question of whether or not it's a progressive tax.

And here I'm in a bit of dilemma as I find I'm on the side of the Tories. Osborne has been claiming it's a progressive tax as poor people spend less and also spend their money disproportionately on zero rated goods: principally food and children's clothes, and energy remains at 5%. That's what I thought too but Ed Milliband disagrees, claiming it's regressive.

And so I was interested to come across this article on the BBC news web site Is the VAT increase regressive?. The answer is: it depends on how you define progressive and regressive.

The article ends by suggesting that the truly progressive tax option is income tax as "Income tax bands and allowances are specifically designed to ensure the poorest pay least". Well yes, that's true as far as it goes. But the reality is that at the top end the rich manage to avoid tax very effectively so that the poorest often end up paying a considerably higher proportion of their earnings in tax than the richest.

That's what I like about VAT: it's hard to avoid so for all its weaknesses it does seem to me to be a good route if we have to increase taxes.