The madness of the last month and a half have left me with little time or energy to sit back and wibble on here as I normally like to do but I've got a little more time now and I've been very taken with a new toy I bought a couple of months ago now just before this all began.

For a long time I'd held off buying a smart phone. You may remember I dabbled with a Samsung i8910 for a while until the touch screen broke but in truth I didn't get on with it that well with it and was grateful to be back with my trusty Nokia 6760 about which I've written before. 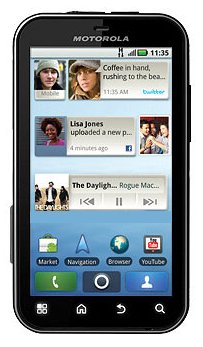 But still I was tempted by a touch screen smart phone and it had to be Android. The only question was which one. I did toy with getting a Flipout for a while as it had a keyboard, but in the end I went for a Motorola Defy which I can best describe as "an Android phone for clumsy people". It's got Gorilla Glass on the front and a rubberised case so you can drop it and it says "yeah, so, wot else ya got?". Better yet if you drop it in a bucket of water it doesn't mind at all! (The spec is IP67 which is "dust tight, immersion to 1m".)

I've replaced the microSD card with an 8GB one I had kicking about but otherwise that's about it on hardware.

So what do I think of it? Well I'm just bowled over by it on the whole. Here's a few examples:

Other things I've noted with admiration include Google Latitude which means I can let Beth track my location at all times by turning on the GPS on the phone which was useful when I set off to walk the dogs when feeling ill1 so if I didn't reappear she would know where to send the search party; the RPN calculator; the integration with Dropbox, Pixelpipe et al; and Trainline Tickets which, although it's meant to be there to sell you tickets, is actually a great little free app for looking up train times while on the move.

Oh yes, and it can already play some video via a special YouTube app. When it gets Android 2.2 in a few days it will be able to play them in the browser. Not sure why I want to play much video on my phone mind you, but the odd short clip via Facebook or Twitter can be amusing.