Well, we finally made it into The New York Times after their visit before Xmas. The article is online here but that link will only work for a few days so here's the text below along with the image from the article. (There was an option to click for a larger image, which contained a much better version of the same image uncropped - you can see that here.)

MILTON JOURNAL
No Telly in the House? Expect an Official Warning
By SARAH LYALL 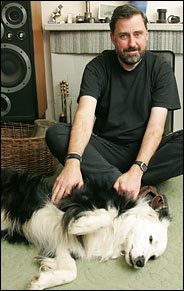 MILTON, England - In Paul Oldham's bathroom is a cartoon that sums up his attitude toward the role of television in modern life. It shows a couple slumped together in their living room, staring at a beaten-up old supermarket carton. The caption reads: "Let's stay in and watch the box tonight." A 44-year-old Web site designer, Mr. Oldham is not now and never plans to be a member of the television-owning public, having given it up in exasperation when "Inspector Morse" went into reruns. But for more than a decade he has been enmeshed in a bizarre pas de deux with the agency that polices television ownership in Britain, and that seems intent on proving him a liar.

No matter how much Mr. Oldham protests, he said, stern letters come inexorably in the mail, informing him (in case he has forgotten) that he has not paid the £121 BBC license fee (that's $233) required annually of every owner of a "telly." If indeed he is found to be harboring a television illegally at his home in Milton, just north of Cambridge, the letters remind him, he could be fined £1,000 ($1,923) or wind up in jail.

"They really are quite odious letters," Mr. Oldham said. "They work on the assumption that you are a criminal."

Each time, Mr. Oldham writes back to declare that he has no TV. But in its most recent notice, the agency told him that he should be prepared to prove it to the enforcement division, whose officers planned to drop by for a little television-hunting expedition at his house.

While not commenting on Mr. Oldham's case, Chris Reed, a spokesman for the agency, called TV Licensing, outlined its general policy. "We wish we could believe everyone who tells us they have no TV," he said. "But unfortunately, last year just under half the people who claimed not to have one were found to be using one, and therefore needed a license, when we checked the premises."

License fees date from the 1920's, when the British Broadcasting Corporation charged its first customers 50 pence a year for the privilege of owning a radio. For decades, the BBC was a monopoly and the fee - expanded to include television in 1946 - was easy to justify.

But the broadcasting landscape has expanded beyond all expectation. BBC television has now been joined by hundreds of commercial stations that compete for advertising and viewers but do not receive a share of the license fee. The government has pledged to keep the current system in place when the BBC's charter is renewed in 2006.

The fee is very much a part of British life. It is a criminal offense for anyone with a television set not to pay it, whether they watch the BBC or not. Fee-evasion cases make up 12 percent of the caseload in magistrates' courts. Although most evaders are fined, 20 people were imprisoned for nonpayment last year.

The BBC took in £3.9 billion ($7.5 billion) from the fee in 1993, but 5.7 percent of television owners still failed to pay. TV Licensing regularly carries out campaigns to warn them about the consequences of inaction that say, for instance, "Get one or get done" - "getting done" being slang for getting caught.

Enforcement officers visit homes and businesses about three million times a year. They have a variety of weapons at hand, including a law that requires retailers to notify the government whenever someone buys a television; a database with TV-owning information about 28 million Britons; and specially equipped vans and hand-held devices that can detect unlawful television-watching.

The final step is a home visit, whose purpose, Mr. Reed said, is "to identify genuine non-users of television so that we can minimize future contact with them." Homeowners are not obliged to let the agents in, but the agents can get search warrants if there is sufficient evidence of television viewing. Every day, more than 1,000 people - 380,000 in 2003 - are caught watching television without a license.

But in its enthusiastic execution of its appointed task, the agency can sometimes be overzealous. It often seems unable to recognize the distinction between shirkers and non-television-watchers, like 28-year-old Graham Smith, from Southampton.

Like Roald Dahl's Matilda, Mr. Smith was traumatized by a childhood in which the television was never off; his family had four people and five televisions. "We used to joke that one of the TV's was like a dog," he said.

But Mr. Smith's decision some years ago to renounce television ("At first it was like a withdrawal from drugs," he said) did not persuade the licensing agency, which began exhorting him to pay the fee shortly after he moved into his house several years ago. At one point, he was getting a letter every couple of weeks - up to 30 in 10 months, he said.

"After about four or five months, my partner caved in a bit and sent four of the notices back, saying that we didn't have a TV," Mr. Smith said. "But strangely enough, they kept coming and coming." He began throwing the letters in the garbage, only to receive an "official warning" of a home visit in a much sterner tone, containing alarming allusions to legal activity and potential prosecution.

When he complained, the licensing authority apologized - then sent him another warning a few days later. "I can understand why they want to ensure the maximum number of people possible have a license," Mr. Smith said, "but I don't see why I should be essentially persecuted for not having a television."