I can't remember now how I discovered John Dowland but I suspect it was as a result of buying a CD of works by Weelkes1. Anyway Amazon had John Dowland's "Collected Works" by The Consort of Musicke available as a 12 CD set. It wasn't cheap mind you. The price seemed to drift up and down. I see it's £67.39 today. So I sat on my hands. 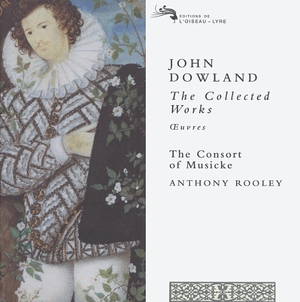 Then one day I was on Amazon and I saw one of their partners had it one sale for £29.90 so I was on it like a shot. Time passed. It didn't arrive. In the end I had to get a refund.2

So by now I was annoyed, not least as I'd told my parents I'd spent part of the cheque they'd given me for my birthday on this set of CDs. In the end I bit the bullet and bought the MP3s from Amazon.

This is not something I'd normally do to be honest as I prefer to rip my own MP3s for the Squeezebox Server but at least this way I got the music (and it wasn't that much more expensive at £36.99).

If only it was that simple.

The first, and most fundamental problem, was that Amazon had decided in their wisdom to set some rather odd ID3 v2 tags. This meant that all 282 tracks appeared to be on one album rather than 12. So I had to write a script to:

All of this was done over multiple iterations and several passes when I've felt up to it. Testing each time meant getting the Squeezebox Server to rescan our MP3 library and, as we've got 5515 files in there, that takes a while.

It was also not helped by a weird bug where if I used id3v2 to change any ID3 v2 tag it apparently made all the other tags look corrupt to Squeezebox Server, but not to id3v2. In the end I switched to eyeD3 which didn't exhibit this behaviour and finally today I've succeeded in breaking up the collection into 12 albums and I can listen to it without having to commit to listen to all 282 tracks at once.

So what's the moral to this tale: well largely that Amazon MP3 downloads are a bit sucky in their ID3 tagging if you're using a Squeezebox Server3.