Our house server, clive, has been playing up over the last few days in a way I can only describe as "odd" and I finally isolated it this morning to one of the drives in the primary RAID-1 array being on "go slow".

This presented something of a problem as clive is our server for just about everything, not just file and print but also our web server, mail server and, most important of all our DHCP and DNS server. So taking clive down means all the other PCs on the house network can no longer do DNS look ups and it all goes to rat shit very fast.

I've been thinking about this issue for a while, not least because I occasionally need to re-boot clive after a kernel upgrade and that means checking Beth's not wanting to do anything while I do that and then crossing my fingers clive won't decide to fsck any of the drives on re-boot.

The solution I'd had in the back of my mind for a while was to take the Raspberry Pi, which I bought ages ago and I've not really used as much as I hoped, and turn it into a DHCP and DNS server. Then I could taken clive down when I wanted and only lose file, web, print, and mail services for a while - all of which we can do without in the short term.

So today I did it and pretty painless it was too and the Raspberry Pi is now sitting there, inside its lovely Pibow case, on top of an old cable socket on the wall of my study1 and is both our DHCP and DNS server. 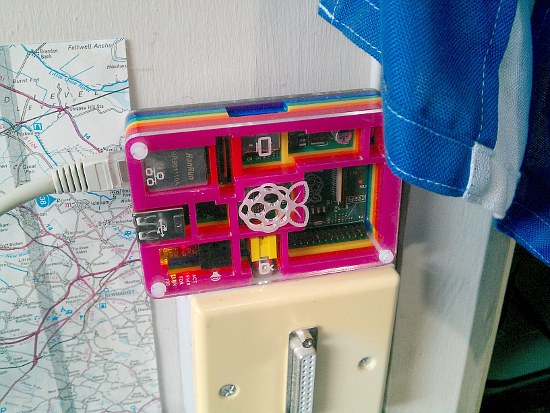 It's barely ticking over, the load average is typically 0.01, and it's hardly getting warm.

Having done that I turned off clive, vacuumed it out and un-plugged, wiggled and re-plugged the SATA cables of the two drives in the RAID-1 pair. Then I re-booted. The drive was no faster. Oh well, it's only six months since I bought them from World of Computers up the road so I started to write an email to them explaining what was going on and asking for a warranty exchange. Then, as I'd run hdparm -tT /dev/sdd on the console but now wanted its output to include in the email I re-ran it in an xterm window ... and the drive was now running at full speed!

So I'm not sure what's been going on but it's not faulty now. How long it will last I don't know and I'll have to monitor it but at least I now have a strategy in place which allows me to safely take clive down for reasonable periods of time so that's a result.

And the Pi does look very pretty perched there on the wall.