I'm in a state of moderate excitement at the discovery today that BBC Radio 4 Extra is starting a four part serialisation of The Beekeeper's Apprentice starting this Friday. 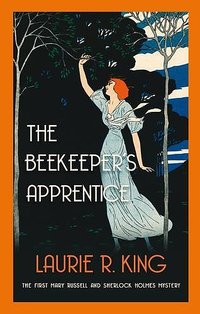 I've been a Sherlock Holmes fan for years. When I went to India, in the days before e-book readers, the only books I took were all the Holmes stories in Strand Magazine reproduction format. That ran to three tight packed volumes in paperback and, as I'd only paid £1 for each book, I was able to discard it as I finished it and reduce the weight I was lugging about.

I always enjoy them when they're dramatised on Four Extra but of course I know all the plots so the discovery of The Beekeeper's Apprentice a few years ago now brought some new pleasure into my life. The book, and the following novels (from memory I think I've got four or five but Amazon suggests there are now at least ten in existence) are up market fan fiction, by Laurie R. King. I can't help thinking that they started off as a simple internal fantasy on her part as they tell the story of a young girl, Mary Russell, who eventually befriends the now retired Holmes. In his retirement he has become an apiarist, hence the title of the first book.

So I'm now hoping that Four Extra do a reasonable job of turning the book into a radio drama. We will find out on Friday.

(By the way, this post reminds me that Four Extra never did broadcast any more episodes of Swallows and Amazons about which I posted about a month ago. Grump.)