I saw a chart in today's i which explained very clearly why Ed Milliband was so willing to walk away from union funding. I'd suspected for a while that he was being rather smarter than everyone was painting him and this chart confirms it. Take a look: 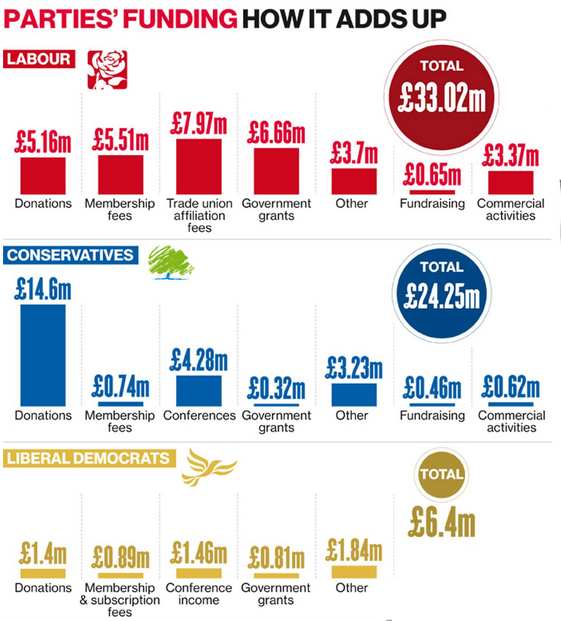 Let's start off with the most startling figure which is that union funding is just under a quarter (24%) of Labour's income. Moreover if they lost it completely (which isn't what Milliband is proposes, he's just proposing it not be automatic) they would still have an annual income of £26.35M which would mean they would still have £2M more coming in than the Tories1.

I think most most people (including most politically aware people I suspect) would be very surprised to be told this. There's a deep rooted assumption, fostered by Tory rhetoric, that the Labour party is almost entirely union funded. So by dumping union funding Milliband lances that boil and appears to wound himself while actually not doing so that badly (not that it wouldn't hurt a lot mind you, but it wouldn't be the terminal blow that commentators would like to suggest).

And it's worth his while doing so because of the elephant in the room. Look at the Tory figures: they are heavily reliant on donations; it makes up a hefty 60% of their income, far higher than the 24% of Labour's union funding. Milliband wants to cap the maximum donation from an individual or company because I'm sure he knows that some of those Tory donors are big, and if the Tories keep banging on about stopping the unions funding Labour then they're going to find it very hard to explain why some controls shouldn't be applied to their funding.

Of course this does mean he's playing a long game: he's got to get a majority first. But if he does ...