I was on bing today looking at Milton and, blimey, is the locations overlay poor. I've had to use a screen grab below as an embedded map doesn't include the overlay but take a look: 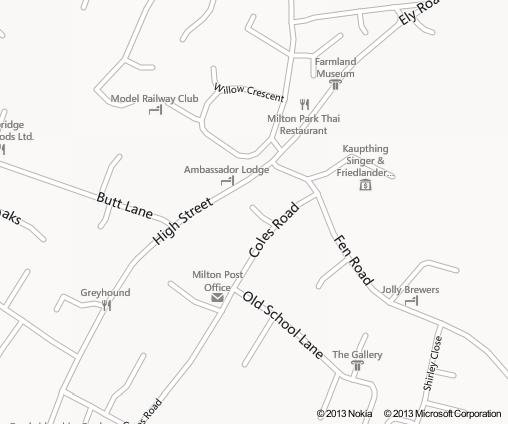 For a start it's got the Jolly Brewers way down Fen Road beyond Goding Way rather than next to Fen Road, the Post Office is half way down Coles Road instead of being at the north east end, and Ambassador Lodge has moved out of Willow Crescent to a position further down the high street.

But these relatively trivial ones. It gets worse with Milton Park Thai (which is no longer Thai) at the wrong location on Ely Road by a long way and on the wrong side of the road. The poor old Farmland Museum is up north of Waterbeach really and Kaupthing, Singer & Friedlander is, slightly bizarrely, shown as being in Milton Hall in Church Lane. I say bizarre because the entrance into Milton Hall from Church Lane closed a decade or more ago and in any case that company went into administration in 2008.

That only leaves The Greyhound pub in the high street. Except of course although there's not one there. There's not one in Cambridge any more either. However from the phone number it's clear that the one they had in mind is the one in Sawston, about a dozen miles from here on the other size of Cambridge.

Not sure if it's Nokia or Microsoft but someone's not doing a very good job at this.

Anyway I have experimentally submitted feedback on two of these (Jolly Brewers and Post Office). If they bother moving those in finite time I'll go back and do the rest.