Only a week after writing Chromebook, First Thoughts I find myself writing some closing thoughts on my Chromebook experience as the Lenovo n20p Google Chromebook went back to Google yesterday. The the discovery of a dead pixel (or pixels) on the lower right side of the screen which was the final straw.

So what were the other problems? Well let's talk about that keyboard first as it was a big issue. I read a lot of articles about the n20p. Some people actually liked the keyboard, some didn't, but none really hated it. So I persevered thinking maybe it was just my typing style. It wasn't: it was the keyboard. It missed keystrokes. It got the wrong keystrokes.

The layout didn't help either. The lack of PgUp or PgDn keys. No Delete. All very odd. 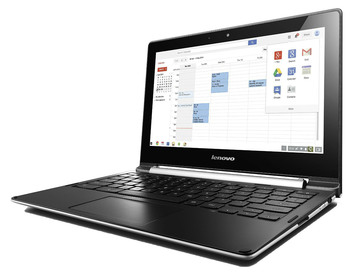 As for Chrome OS itself the App store looks impressive but actually there's very little there. Most of it is actually just bookmarks to web sites. So the ToDoIst "app" is identical to simply going to http://www.todoist.com. Why bother installing it? Well only that it puts it only the app menu.

Real apps are thin on the ground. Take email. Now if you want to use Gmail then you're fine of course but if you want to another IMAP mail account elsewhere, as I do, then there is precisely one app available and it's really not very good. It's not very fully featured: for example it doesn't support multiple identities, which is vital for me. As it happens I've got a webmail interface to my IMAP server so I can use that, but it doesn't bode well.

So moving on the reddit app is ... well, OK ish, but nowhere near as good as BaconReader on Android.

And then we get to SSH. There is an SSH app, which I thought was excellent news as I need that to access out servers ... except, it only supports SSH access using username/password not public key.

The file manager is limited. And apparently you can't update data on the SD card. At all. I thought initially this was just me setting the wrong permission on the files but no, it's a deliberate decision by Google: they mount it read only - they don't want you using it as proper storage, you're meant to use their cloud storage for that.12.

Talking of that SD card it stick out half way when inserted. Again apparently this is a deliberate Google design decision. Luckily there is now a way around this as several vendors of micro-SDHC cards are producing half height adaptors.

So where does this all this leave me? Well the overwhelming impression was that Chrome OS is in its infancy compared to Android. There is a far richer selection of apps on Android and many are much better including the aforementioned BaconReader, excellent file managers, mail clients, SSH clients, the list goes on and on.

For what it's worth I think the future for Chrome OS is the merging of the two which does seem to be happening as Google is now opening up Chrome OS to Android developers so we're going to see a lot more Android apps on Chrome OS. If that does happen I'll re-visit this especially with machines like the Asus Chromebook Flip in the pipeline which I think might suit me very well with some decent apps.