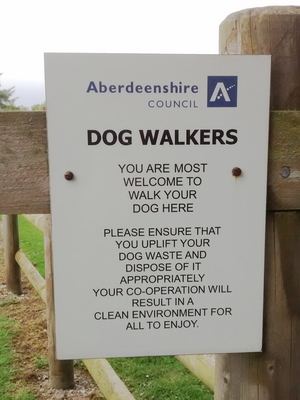 One of the things that intrigues me about Scotland is that although they (mostly) speak the same language we do south of the border there are odd words in their vocabulary that are different.

The first one of these that I noticed, a long time ago now, was "outwith". I remember when I first saw this used in a letter from a Scottish friend of mine I was surprised. As I understand it from examples since it's a synonym for "outside", so you might say "that's outwith my experience" or "Milton is outwith Cambridge".

You never used to hear it in England but you do now and I wonder if became more commonly used in the decade when Labour were in power when many of the leading politicians were Scots so used it routinely in interviews.

Anyway, last week we were in Ballater and I happened to glance at this sign while walking Jack and discovered a new word usage. Apparently here they "uplift" their dog waste.

I've only ever seen that word used as a noun by management, never as a verb. I wonder how widespread it is in Scots English?