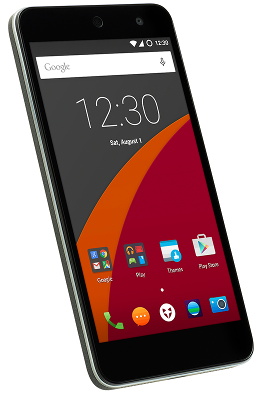 I've got a new phone. Yeah, yeah, so what? You're always getting a new phone. Well, actually it's a good 18 months since I bought the Moto G dual SIM phone as a grey import from India and I've been looking enviously at Beth's 4G Moto E as it's so blisteringly fast and 4G coverage is getting very good now, often better than 3G.

But I do like my dual SIM phones and finding one that supported UK 4G frequencies proved tricky. I was toying with getting the OnePlus X but then someone on milton-chat mentioned they had just bought a Wileyfox Swift which is another dual SIM phone, UK spec 4G, runs Cyanogen 12.1 (essentially Android 5.1) and is remarkably reasonably priced at £129 from Amazon who are Wileyfox's main distro.

I had briefly looked at this phone a little while ago but the review I read claimed it only supported 4G data on SIM1 not on SIM2 however it turned out, when I chatted to the milton-chat subscriber, that this was bollocks. Just like my Moto G you can only do data on one SIM at once (which is fair enough, the routing would be hairy otherwise) but you can pick either SIM to be 4G data (if available) and voice, the other is then 2G voice only and it takes only a minute or so for it to toggle once you ask it to (just like the Moto G).

Better still Amazon had already had a one day offer on this at £99.99 so I sat on my hands, especially after discovering camelcamelcamel which lets you track the price of items on Amazon and alerts you to changes by email or Twitter tweet. Here it is watching the Swift and I grabbed one on 4th December at £99.99.

And it's fine. To be honest I've nothing more to say about it than that really as one Android phone is much like another, especially now that Google make the transition so easy: oh, I see you're using a new device, from which of your previous devices would you like us to copy the configuration and installed apps over or words to that effect.

The only real differences are that it's lighter, faster (both mobile data and in general), and it holds charge longer: I'm typically only charging it every couple of days.

The other thing I've been meaning to mention for some months is that I'm now using Three for one of my two SIMs (the other remains on giffgaff). I'm using them because their newish 3-2-1 PAYG tariff is spot on for my usage pattern. So that's 3p min for calls, 2p per text and 1p/MB data.

It's that last that is the clincher for me (although calls and text are very good too compared to most PAYG tariffs). Previously I was buying GiffGaff 500MB gigabags for £5 a month (as this was cheaper than their 20p for up to 20MB PAYG daily tariff, which I would occasionally break anyway) but I never used all the data in a month. The Three deal was cheaper as it was 1p/MB again but I only pay for what I use. I'm also wondering if Three count their data differently as I'm currently averaging about £2.10/month and that includes the odd phone call and text on top.

The only catch, and it's a small one as I don't make or receive many phone calls on that number, is that if I needed to switch data to GiffGaff for some reason then I'm stuffed as Three (generally) don't have any 2G coverage.

Oh yes, and in theory Three won't let me tether. In reality it seems to work, with my tablet at least, which is the situation where I most often want to tether. But if it becomes a problem I can always flip over to GiffGaff for data temporarily as they do allow tethering (except on their "unlimited" options).