I got an email recently from a company asking if they could use some of my photographs. This is it: 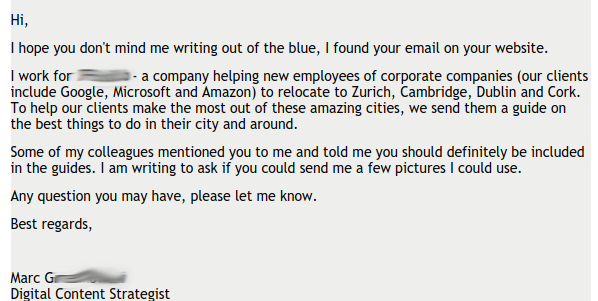 I naively thought that the key parts are:

I hope you don't mind me writing out of the blue, I found your email on your website. [...]

Some of my colleagues mentioned you to me and told me you should definitely be included in the guides. I am writing to ask if you could send me a few pictures I could use.

but I was unclear what "pictures" he was talking about as I look after lots of web sites around Cambridge and my photos, and Beth's, appear on many of them. So I replied asking which photos he had in mind.

Today I'm on the sofa (yup, migraine) so thought I could at least tidy my mailbox and there was this email. Then I did a double take: at the bottom of the email was an "unsubscribe" link. The email had been generated by spamming software!

The sneaky f*ckers. Now I realise that the key part of their email was somewhere else entirely: they just wanted to put their services on my radar.. Nice bit of bait and switch there folks.

Anyway I've blurred out their name above as I don't want to give them any more free publicity but if you get a similar email, and you may if you work in IT around Cambridge, then you will be prepared.