Now that we're back in Milton I can safely post publicly about events of the last week so here goes (photos of me by Beth throughout).

We went right right up to the wire with our solicitors. Speaking to him on the Thursday when we took possession he commented that he suspected that the sellers' solicitor didn't normally do conveyancing (I think he was a relative). Anyway come Wednesday we did get confirmation that it was all going through so we loaded up the shiny new trailer which we bought a few weeks ago and Beth dropped me at Waterbeach for the trip north by Caledonian Sleeper. 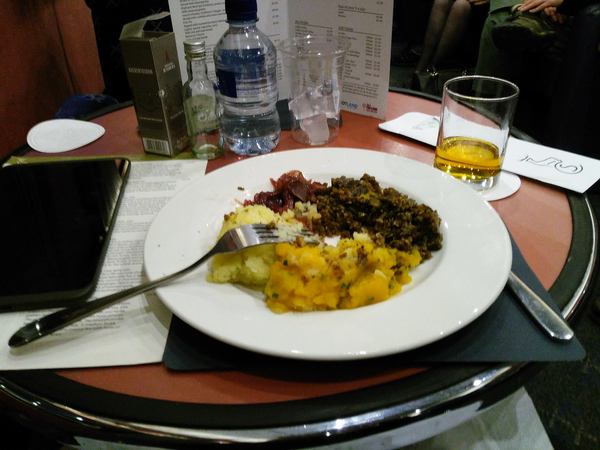 Supper on the Sleeper

I have to say the sleeper trip was a bit of a curate's egg compared to some I've done. On the plus side supper (haggis, neeps and tatties with red onion) was excellent and the Auchentoshan 12 year old1 worked well for this non-whisky drinker ... but breakfast wasn't. Microwaving a carton of pre-cooked bacon, sausage, tomatoes, haggis and something which might one have been scrambled egg doesn't work out well.

But watching the highlands glide by in the lounge car during and after breakfast was a joy and we pulled into Inverness in good time for me to hop on the train to Nairn. When I got there I went to Café Nairn for a proper Highland breakfast which was excellent (I can particularly recommend their fried bread) other than scrambled egg which I suspect was done with some sort of scrambled egg mix. 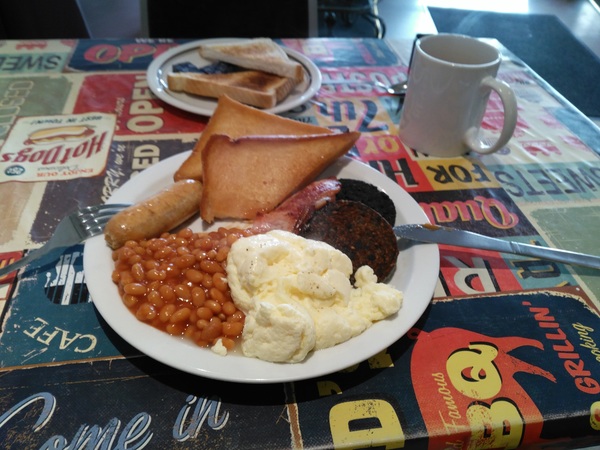 I was then left twiddling my thumbs until just before 1pm when, as I nibbled lunch in another café, I got the word that I could collect the keys from the estate agent so I toddled around ... and they'd not heard from the sellers' solicitor yet. Argghhh. So outside to phone our solicitor again. By the time I went back inside they had finally heard so I picked up the keys and, stopping briefly to pick up milk and supper, headed for our new home.

When I got there they clearly still hadn't quite finished emptying the house. There were odd bits still lying around, the vacuum was still there and one car was on the drive. No sign of them though. So I walked in. About an hour later they turned up (they were surprised to find me already in I think) so we had a chat, agreed the final meter readings, and they left.

Beth turned up, somewhat later than planned after being delayed by a lorry fire on the M74 south of Glasgow, and the four of us finally got settled in for our first night on lilos.

Dreams delivered the spare room beds as promised2, having phoned first thing to announce the two hour window they would deliver in and then again 15 minutes before they turned up. So impressed with that. These would be our bed (joined together with cable ties) for the rest of this trip.

Once they'd gone we hotfooted it round to Sainsburys in Florence to get supplies. We were both pleasantly surprised by the store, which we didn't really go to on our previous trips. And not only were the things we bought often nicer than Tesco (smoked salmon for example) but often cheaper too. 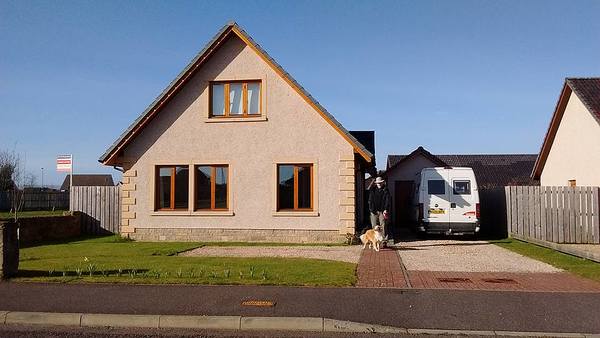 Off on our first walk

Then off for our first walk to the beach. The tide was in but it was still fabulous. This is why we've moved to Nairn. 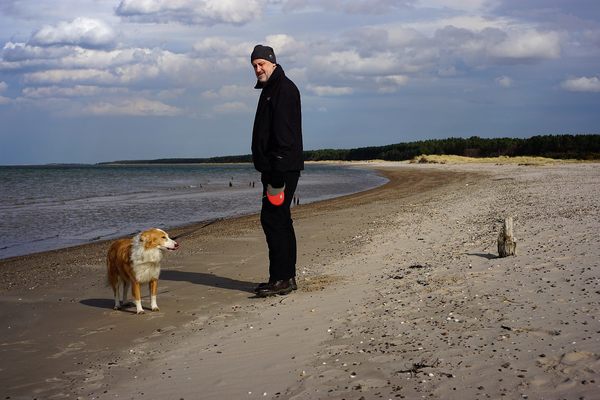 First time on the beach

Up early and after a short walk with the dogs around the quarry off to Inverness in search of a dining table as we'd decided our Edwardian table and chairs didn't fit into the house and had to go. We'd spotted a place selling a pine table and chairs for £189 but we thought we'd pop into the British Heart Foundation furniture shop first to see if they had anything good in there.

They had what turned out to be exactly the same table, new and for £129 rather than £189, and in stock. So not only did we save £60 but also made some money for the BHF.

And then, while we were there, we idly looked at sofas (we want two for the sun room) and spotted an identical pair which suited nicely. We thought they were £115 each, "och no," he said "that's for the pair". So that's another thing sorted out and they're delivering the sofas on Wednesday.

Amazing windy on Saturday night into Sunday. The bins were all over the garden. On the plus side it did give me an excuse to speak to the neighbours at the bottom of the garden (John and Margo). 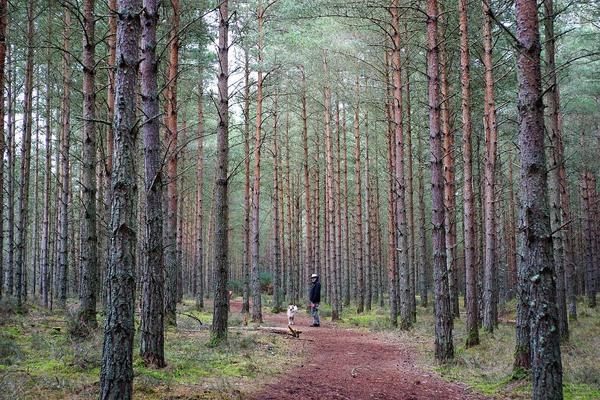 In the afternoon we went back down towards the beach but branched off right to explore the woods a bit before heading to the beach. Yet more great places to explore, with red squirrels too allegedly although we didn't see any.

While Beth was off for a walk I had a look inside the south and north attics (we have three due to the odd construction of this place, plus a fourth with no access as far as I can determine). My conclusion was that the builders of this place were sloppy (building regs? Wot building regs?): in the south attic several of the joists have no insulation, at all, between them and the pipe insulation on the pipes is minimal and poorly done. So that will all need sorting before the winter.

Paul and Helen came over to see the house (well Helen did, Paul lurked outside because of his pet allergy) bearing gifts of honey from their hive and a pine bedside table they had spare. We went for a long walk on the beach and in the woods and then they went off for a cycle while I walked to Sainsburys for supplies. 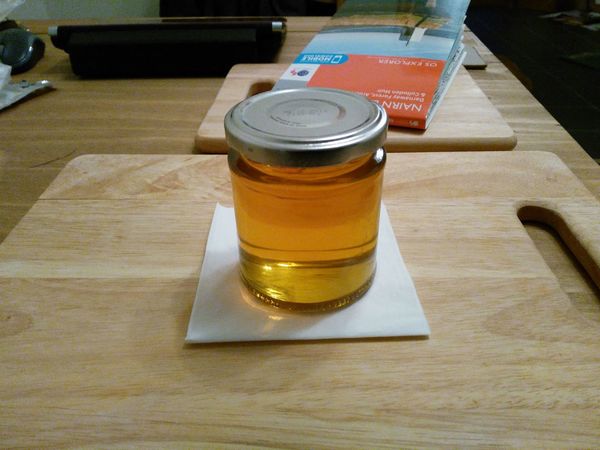 After lunch we walked into town for a wander about. We bought some books from the excellent little bookshop and Beth got some meat from one of the butchers.

I think I must have walked about ten miles today!

While Beth went for a wander I did some work on the house. I cleaned some of the windows and then took the bus into town (an adventure in itself!) in search of door stops as most of the doors don't have any so the handles are crashing into the plaster. Found everything I needed in a very versatile little general hardware place in the high street.

Came back and installed the door stops. Also re-wired the light switches in the kitchen into a logical order(!)

We finally got to talk to Katherine next door properly today (Beth spoke to her very briefly yesterday). Also her friend Bill who lives over the road. We seem to be moving from one road full of retired people to another although at least this time they're rather younger.

The sofas came. We almost screwed up: they're very nearly too big but as it is they make really good use of the space. Now we need two little "bedside" tables to go at the garden end of each sofa for putting mugs of tea on and we'll be good to go.

Went to Sainsburys again and bought a couple of cushions for the sofas, plus some supplies to keep us going while we're back in Milton: cheese and smoked salmon for Beth, haggis for me. Sadly we forgot the tea bags I needed.

On the way back popped into Nairn Bookshop for two books I'd seen on Monday but not bought as they were too heavy: Scotland: An Encyclopedia of Places and Landscape by David Munro and Bruce Gittings and Scotland: A History from Earliest Times by Alistair Moffat. Those should keep me occupied for a while.