This morning's post brought a new toy courtesy of Amazon, a Logitech Squeezebox. This cute little bit of kit plugs into your HiFi and your house LAN1 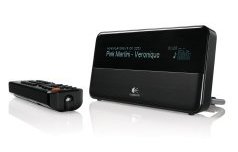 and acts as a head unit for a Squeezeserver.

Squeezeserver runs on the PC on your LAN which holds your MP3 collection, so in our case that's our file server, and streams audio to the Squeezebox. So the end result is that you're got a way of playing your MP3 collection from your HiFi. The Squeezebox has a remote control and a pre-amp so you can control the volume too rather than having to adjust the main amp (and with my ancient amp2 that would mean walking over to the HiFi as it's not got a remote control).

But it does lots more than that too. You can create playlists, either via the Squeezebox or via a web interface to the Squeezeserver. You can also listen to some internet radio stations using it. You can do lots of other stuff via the web interface too, controlling every aspect of the Squeezebox including turning it off and on remotely, adjusting its volume level and so on.

The Squeezeserver software (it was originally called Slimserver by the way) is open source and it's written in perl. It works well on all sorts of platforms, not just Windows but also Mac OS X, Linux and NAS appliances.

People write plug ins too. For example out of the box it doesn't play RealAudio streams which means you can't listen to BBC radio stations. But there's a plug in which solves this problem (if you're running Squeezeserver on Linux anyway) so I've installed that too.

So the bottom line is that from the sofa here using the remote control I can now play any of our 370 CDs which we've ripped to MP3 and listen to any BBC radio station, or KJZZ3, or KOZT4, or 209 Radio5, or even Radio Rivendell6.

It does other stuff too - for example it's got an RSS reader, and an alarm clock. But I'll leave that for another day.