I've written before about Barack Obama. I was first alerted to him by Malcolm at Make Votes Count who are one of my customers. As he was definitely my choice for the next US president I'd tried and failed to buy one of the campaign T shirts - they wouldn't sell me one over the Net as I'm not a US citizen and purchasing a shirt is a campaign contribution. Not allowed under US law.

But Malcolm went to the Democratic convention in Denver (the lucky man) so I asked him if he could get me a shirt (I wasn't the only one). And in the post today came this: 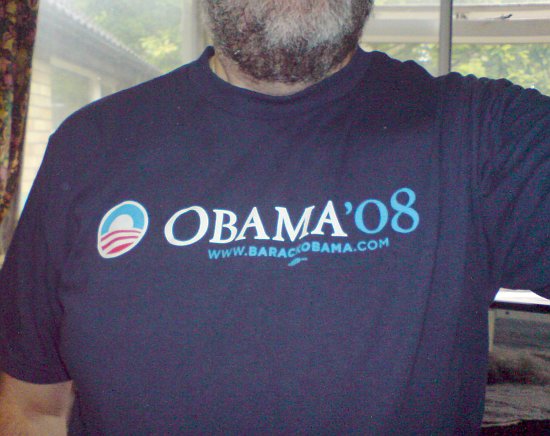 As his blog reveals he ran into exactly the same problem I did, but persuaded a friendly native to do his purchasing for him.

His blog is well worth a read by the way, a convention is really quite an event, not just inside the convention centre either. The whole town seems to have been buzzing with stuff from the serious to the bizarre.

And a public thank you to Malcolm for the T shirt - above and beyond, especially given the hassle he had to actually buy it.