So tonight's entertainment was The Chronicles Of Narnia - The Lion, The Witch And The Wardrobe. We're a bit late coming to this for one reason or another, 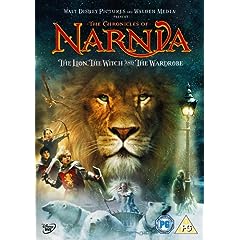 not least that I'd heard some negative reviews but actually it wasn't at all bad.

For a start the CGI has really rather fine. The beavers were a scream and the quality of the fur on Aslan was a joy. Tilda Swinton as the White Witch got the whole evil thing just right: coming over as nasty without camping it up. It's also a difficult one to pull off in a movie which, fundamentally, is aimed at children more than adults.

Having said that a lot of creatures do die in the battle at the end of the movie.

As for the rest of them the children weren't bad either, I've certainly seen worse acting. Ugly little blighters mind you.

Anyway Prince Caspian is now out on DVD so I suspect we'll be picking up a copy of that some time soon.