And so we prepare to say goodbye to yet another member of the Land Rover fleet. At our high point (or "low" if you believe the neighbours) we had five landies: the original Lightweight, Aragorn the new Lightweight, Dougal the Discovery, Big Blue the SIII LWB coil sprung hybrid, and Rudolf the SWB 90. 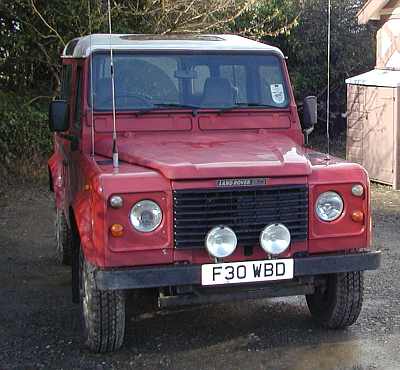 Rudolf in its youth

We bought Rudolf in June 2000 for £4,500. While we've had it the only major non- discretionary expenditure has been a replacement gearbox, which set us back the best part of a grand including fitting.

But last year it struggled a bit to get through the MoT and this year it failed quite badly and also had a long list of advisories so we've decided that it's time to call it a day.

So now before we get it taken away we're stripping out of it the bits we want to keep for use on Big Blue later: the engine (it's another 3.5 V8 like Big Blue), the gearbox, the Webasto pre-heater which Beth fitted when she was using it to commute and wanted a warm car on a winter's morning, the front seats, and all the bulbs and lenses. It's a bit sad really but it's what you do with a Land Rover. They never completely die: bits of them live on in other vehicles.