Having deployed my original Raspberry Pi as our house DHCP and DNS server I couldn't resist ordering another one from RS. The bad news is that the lead time is currently two weeks1, the good news is that the new one will have 512MB of RAM rather than 256MB. 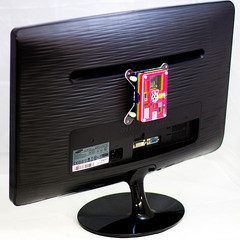 I was pondering what case to go for and was tempted by a cheap one from RS but then on the Pibow site I saw that they'd added a VESA mount layer option to the Pibow case. This replaces the bottom layer of your Pibow case and lets you mount the Pi on the back of a VESA monitor. It's only £3.50 on top of the £12.95 for the original case and it will solve the problem of where to put the Pi in the sitting room as I can bolt it to the back of the monitor rather than having it dangle off the video cable like the old one did.

The next question is do I stick with my own video front end software or use XBMC? I am tempted to do the latter, at least until the long awaited Android port for Pi finally appears (which would let me run the Netflix app and stream as many movies and TV programmes as I want for a very reasonable monthly fee).

Anyway these are all bridges to cross when it comes. What do they say, "he who dies with the most toys wins"? Well I'm working on it.