I've already mentioned that I was sailing down the east coast last weekend. We ended up on the Blackwater estuary as my chart makes clear and spent the night at the marina at Bradwell before heading over to Brightlingsea where we left Serenity tucked up until next weekend.

We had a variety of mobile SIMs with us in our various tablets and phones including Vodafone (both directly and through the MVNO OVIVO), O2 (through MVNO giffgaff) and Three and what struck both of us was how poor the mobile data coverage was considering that we weren't really out in the boonies. Take a look at this map:

This is the area we were in. As you can see we're within a few kilometres of Colchester, Clacton and Maldon, none of which are exactly tiny communities.

But here's what VodaFone were offering us on 3G. No wonder we weren't getting much data. 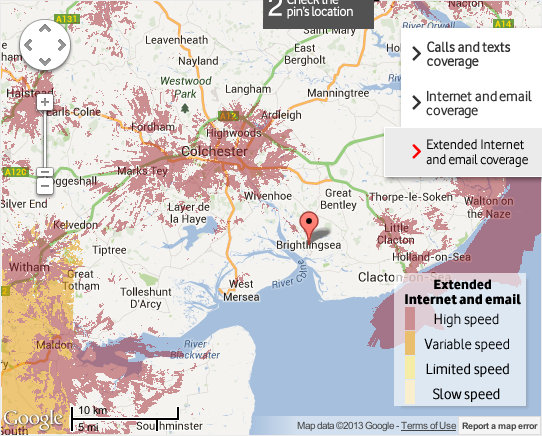 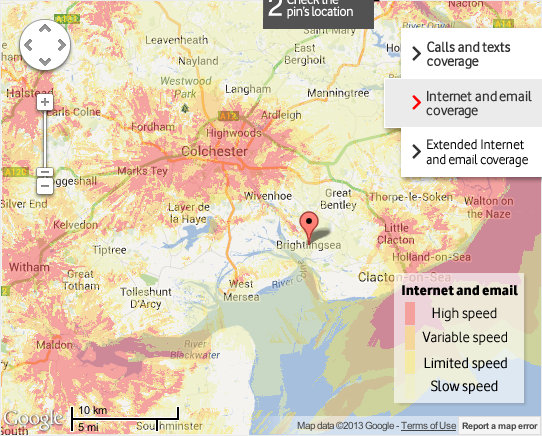 There's barely any 2G coverage at Bradwell1 and there's whole swathes of countryside with no data coverage at all.

What gets me is that this isn't that remote, nor the ground that difficult. I can understand why it's hard to get coverage in parts of Scotland or the Lakes District where there's bloody great hills in the way but this is the relatively flat Essex countryside. It really brings home the truth about those claims about 9x% population coverage that the mobile telcos are so proud of. That "population" modifier really is a weasel word.