Only a year after the last one, the lovely Nikon D5100 with the mighty 18-200mm zoom and I've weakened and bought another camera. What brought this about was a combination of things. First the Fuji X100. If you've seen it it's a gorgeous bit of camera bling and its successor, the X100s is even better. 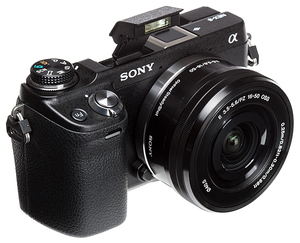 It's going back to the old days, so it's a rangefinder style camera, lightweight, fixed focal length, semi-wide (equivalent to about 35mm in old money1) and with an APS-C sensor and no anti-aliasing filter because of Fuji's clever sensor technology it produces astoundingly good images.

But, when it comes down to it, with that fixed focal length lens it's a second camera. And £870 for a second camera is a lot of money for me right now.

However it did leave me thinking about moving to lighter, more portable cameras again.

And then Beth picked up a Sony NEX-3N at a very reasonable price from Amazon. It's got the same 16Mpixel sensor as my Nikon D5100 and her Nikon D7000 as Nikon buy their sensors from Sony. It's just it's not an SLR. It did however produce cracking JPEGs so their image processing engine seemed to be very good indeed. Better than Nikon's in both her opinion and mine.

She was very happy with it. But it didn't really suit me because it didn't have a viewfinder (which was one of the reasons I'd gone SLR again) and it was too small for my big hands.

So I continued looking around and dithering. I got this close to buying a Fuji X-E1 and then saw a comparative review of it with the Sony NEX-6. Ooooh. Like Beth's NEX-3 only:

The review I was looking at suggested that the EVF was better than on the X-E1, being less laggy.

On top of this Sony are about to replace this with a new model, the A6000, which has a 24Mpixel sensor but other than that some other fairly minor improvements. Unless you're intending to print really big then 16Mpixels should be more than enough as that gives you 300dpi for a 10x12" print (and in any case when was the last time I printed anything!). As a result they're flogging off NEX-6s cheap. I picked one up, with the kit 16-50mm "pancake" zoom, on eBay from a Sony dealer for £429.99.

So, how does it perform you're asking? Well it came yesterday and here's a few samples, mainly taken in Milton Country Park. These are straight off the camera and just shot in "P" mode. Click on any image to see the original full size image.

You really need to look at the full size images to see why I'm so happy with the results. They are pin sharp where they need to be and the depth of field on the middle one is great, you can see that it's in focus on the plate but out across the post. Great bokeh from the background too. Also on the second one of the blossom.

And here's a novelty shot. This is Dickerson's Pit from the end of the pontoon.

That's perhaps a 120° panorama but the camera stitched that together itself, on the fly. And none of this slow plodding along like cameras I've used before that do panoramas where you take a shot, turn slightly, line up the next shot using the hinting, and so on. With the NEX-6 the shutter clatters away like mad and you just swing the camera around as fast as you like and it just gets on with it. And when you're done as you can see you can't see the join.

I am very pleased with it. So the D5100 and the 18-200mm lens are going to go. I should be able to get more for those that I paid for the NEX-6 which means I can then justify buying a 55-210mm Sony E-mount lens which again you can pick up new at the moment for about £150 as the market is awash with them (they're another kit lens).

That will then gives me the same focal length range I had before (although in two lens) but more importantly for everyday use it gives me a camera/lens combo I am far more likely to carry and therefore use.