So the Google Chromecast that Beth bought me for my birthday has been fun. On Netflix I've now watched seasons 1 to 4 of The Good Wife (some of which I'd seen before, especially the later episodes, but not the earlier seasons) and I'm now trying House of Cards but to be honest it's not really grabbing me. There are some other little gems though. Portlandia has proved amusing and I've watched a few episodes of Life on Mars (which is new to me of course as we don't have a TV licence).

Netflix also makes it easier to dismiss things though. For example I started watching Thor the other night, which I'd heard reasonable reviews of, and I stopped after half an hour out of boredom. As I'd not paid for it I won't be coming back to it. If that was a DVD I probably would have struggled on. 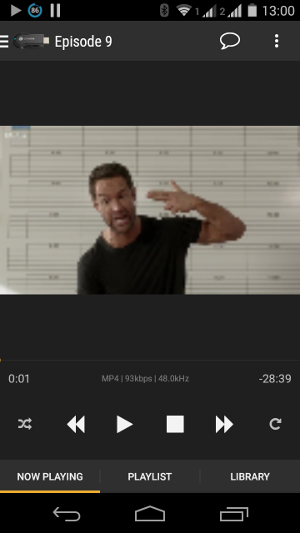 But anyway enough of that, this wasn't the reason for this post. I'd been thinking about how I was going to play content I had on my hard drive for whatever reason.

The solution I rapidly realised would work, which I mentioned before, was to put it on an Android device and cast it from there but that was inelegant - it meant having the device on all the time and moving the file onto the device first. What would be better would be to stream it from one of the PCs on our network.

And this turns out to be very simple as the Chromecast acts like1 a UPnP "renderer" (a player in other words). So I installed the Rygel UPnP AV MediaServer on my PC and pointed it at the folders where I store videos. Then I fired up BubbleUPnP on my phone and it could see my videos and see the Chromecast and I could tell it to get Rygel to cast the video to the Chromecast.

That's what you can see in the screen shot from my phone on the right. It's an episode from Episodes which I'd captured using get_iplayer.

And it works. No fuss. No bother. Result.

Off the back out this I discovered something else too. We buy all our music on CD and then rip to MP3 and store on a Logitech Squeezebox Server and ages ago I enabled the UPnP plug-in without really understanding what it did. I do now. It's acting as another UPnP AV MediaServer serving music.

So I can also cast all our music to the Chromecast. When I do it shows the album cover art (assuming I've got it, and I've got that for about 75% of our albums now, it's mainly older classical works which don't have covers) along with track title etc.

I don't really have much need to do this - I have a perfectly good Squeezebox Classic connected to the hi fi - but it's just a neat trick.